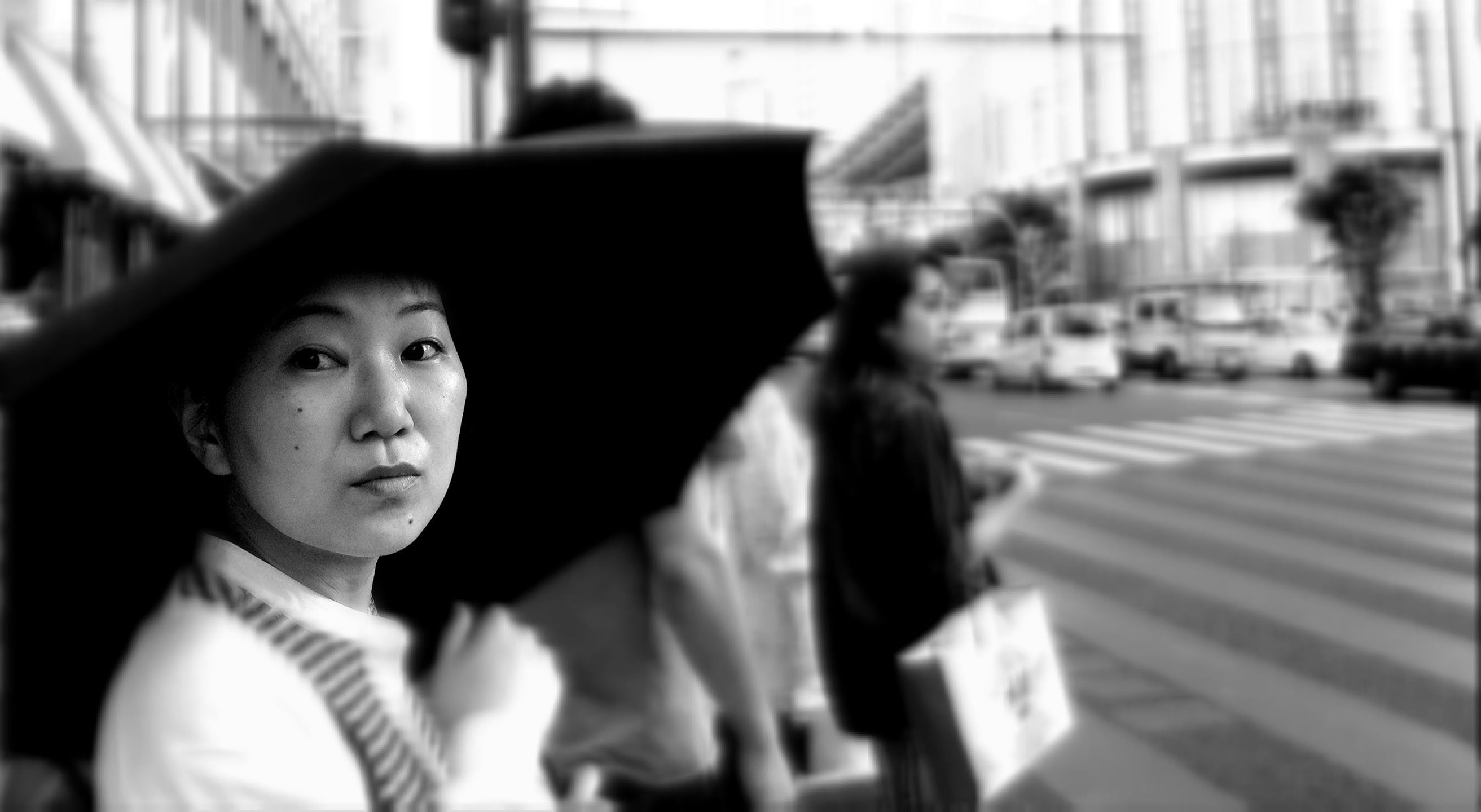 The Best Camera Is The One That’s With You

Scott agrees with photographer Chase Jarvis that,
“The best camera is the one that’s with you”,
and finds it hard to imagine what he did before he
started using his iPhone as a serious photography device.

Scott Woodward believes that photography is the most accessible and democratic form of artistic expression. And that the ubiquity of mobile phones (and their cameras) has made it more convenient than ever to make photographs and tell stories anytime, anywhere.  He feels that the real secret behind great photography is in how you see a moment and interpret it in a still frame, regardless of what type of camera you are using.  Are you able to make something ordinary appear extraordinary?  Are you able to make the viewer feel an emotion?  Are you able to transport someone to a moment with just your images?

Scott agrees with photographer Chase Jarvis when he states, “The best camera is the one that’s with you”, and finds it hard to imagine what he did before he started using his iPhone as a serious photography device.  He’s made more images in the last eight years than than in his entire life, simply because it’s a camera that’s with him at all times.

He recommends taking inspiration from around the world by looking at the endless stream of imagery on Instagram, Twitter and Facebook, and thinks we should use the camera as an excuse to delve deeper into a place than we otherwise would.

Here are his 10 tips for making better mobile photography which originally appeared in the September 2017 issue of Hardware Magazine. 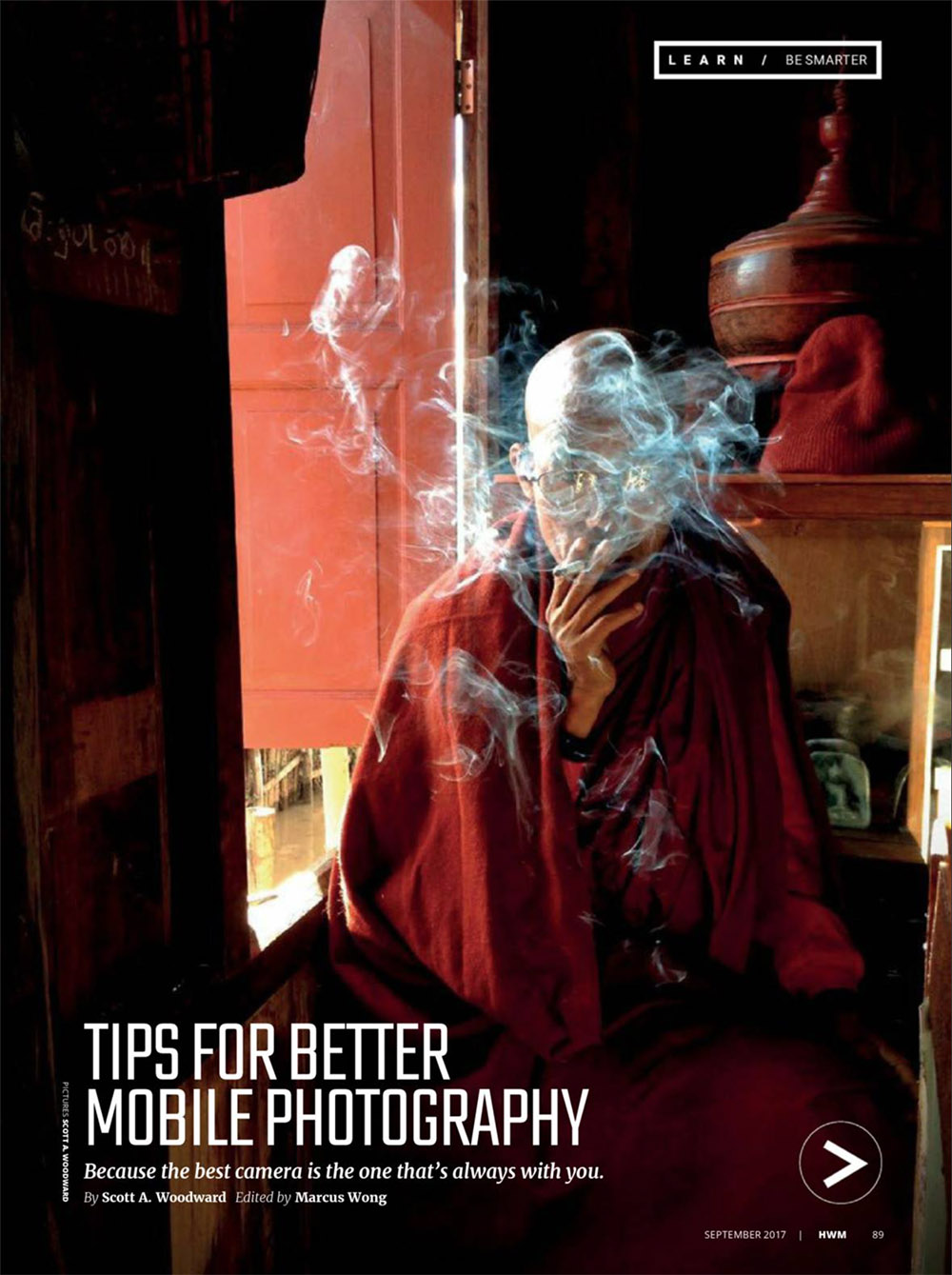 1. LIGHT MY FIRE  The most critical ingredient in all great photographs is the lighting.  The best images always make interesting and powerful use of light. But try to avoid direct sunlight.  The angle of the sun significantly affects the warmth, contrast and texture of a photograph.  As often as possible, shoot in the warm “golden hours” of early morning and late afternoon (one hour after sunrise and one to two hours before sunset) when the sun is low and the light is soft and orange. Dramatic light can make even the most mundane subjects appear outstanding, so also be on the lookout for beams of light peeking through clouds, filtering through trees or shining through windows.  Make use of long shadows cast during the golden hours, and try to use backlighting to silhouette your subjects.

3. GET EXPERIMENTAL  A mobile phone is much easier to handle than a DSLR.  It’s lighter and more compact, so use this to your advantage and be on the lookout for dynamic and creative angles.  Hold it high and shoot without looking at the screen or put it on the ground and tilt it up.  The more creative you get, the more you’ll learn about what works and what doesn’t work, and the better your photographs will be. Or maybe you’ll just get lucky and make a beautiful accident. 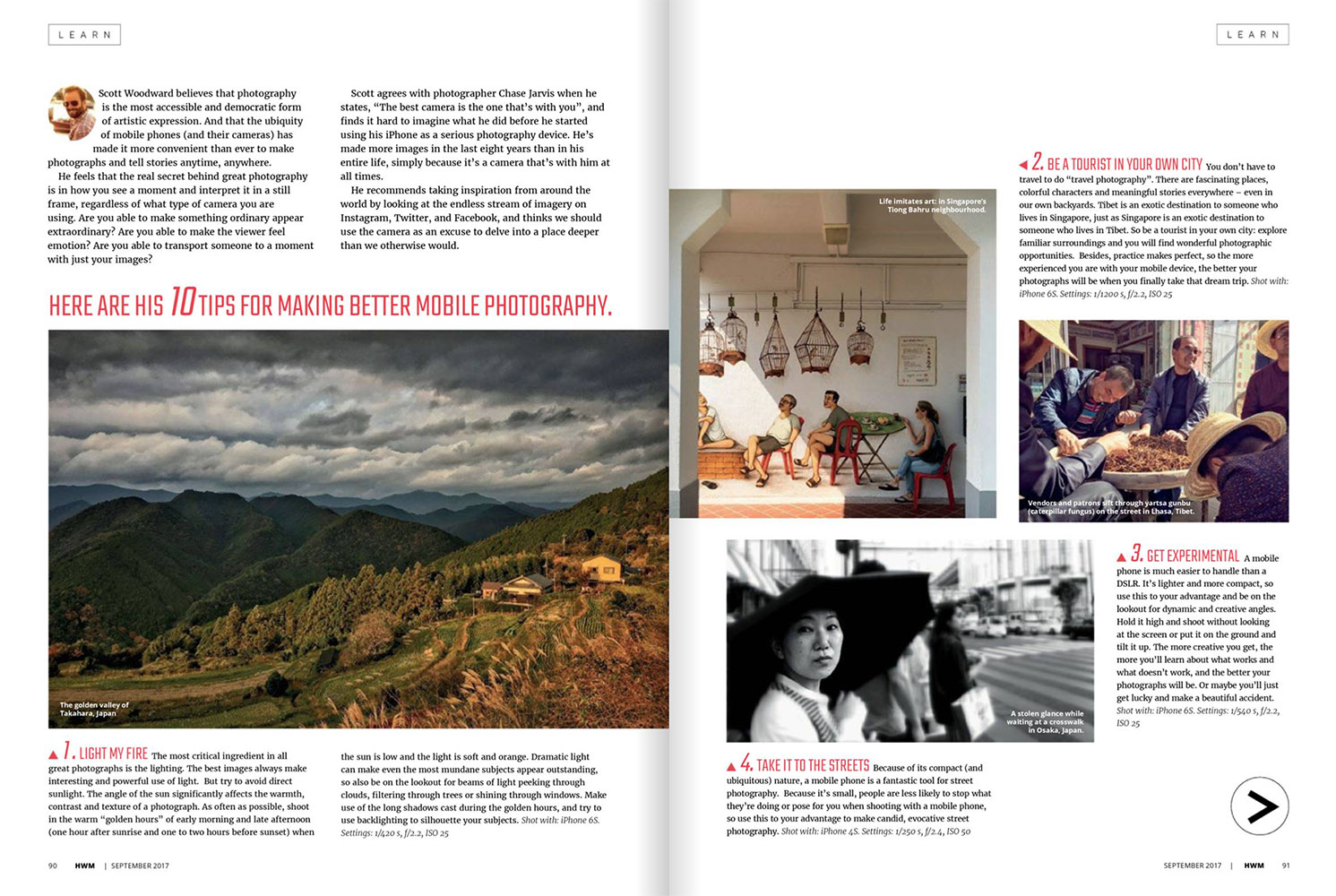 5. ADD LIFE TO LANDSCAPES  Beautiful landscape shots can be breathtaking, but if you’ve ever been subjected to a friend of family member’s holiday snaps, you know how dull they can become after you’ve looked at dozens of them in a row.  Try adding people to your landscape photographs for that human touch.  It gives a sense of scale, offers perspective and adds drama, making it more powerful.

6. GET CLOSE  Great portraits happen when you fill the screen with your subject’s face.  But skip the zoom function.  Mobile devices use digital zoom that crops in on the photo, cutting away valuable pixels and degrading the quality of your image.  Instead, get physically closer to your subject — and when you think you’re close, get even closer.  As Robert Capa famously said, “If your pictures aren’t good enough, you aren’t close enough.”

7. LEARN THE SHORTCUTS AND SETTINGS  Amazing photographic opportunities are often fleeting, so don’t get digging for the camera app. Learn the device or app shortcuts and be sure to turn on your camera’s gridlines in the settings.  This gives you an easy guide to composition using the Rule of Thirds by splitting your screen into nine boxes.  To use this rule, place the most important elements of your scene along the gridlines or where they intersect.

8. FORGET THE FLASH  When shooting low light mobile photography, make sure you turn off the flash.  Mobile phone flashes are simply tiny LED flashlights — their colour temperature is different than natural light, they’re located directly in front of your subject and right next to the lens, and they’re not powerful like a speed light or off-camera flash.  But remember when camera phones shoot in low light, the ISO automatically increases and the shutter speed slows to allow enough light to expose the image.  So be sure to keep the camera steady by holding the device with both hands and bracing your arms against your body. 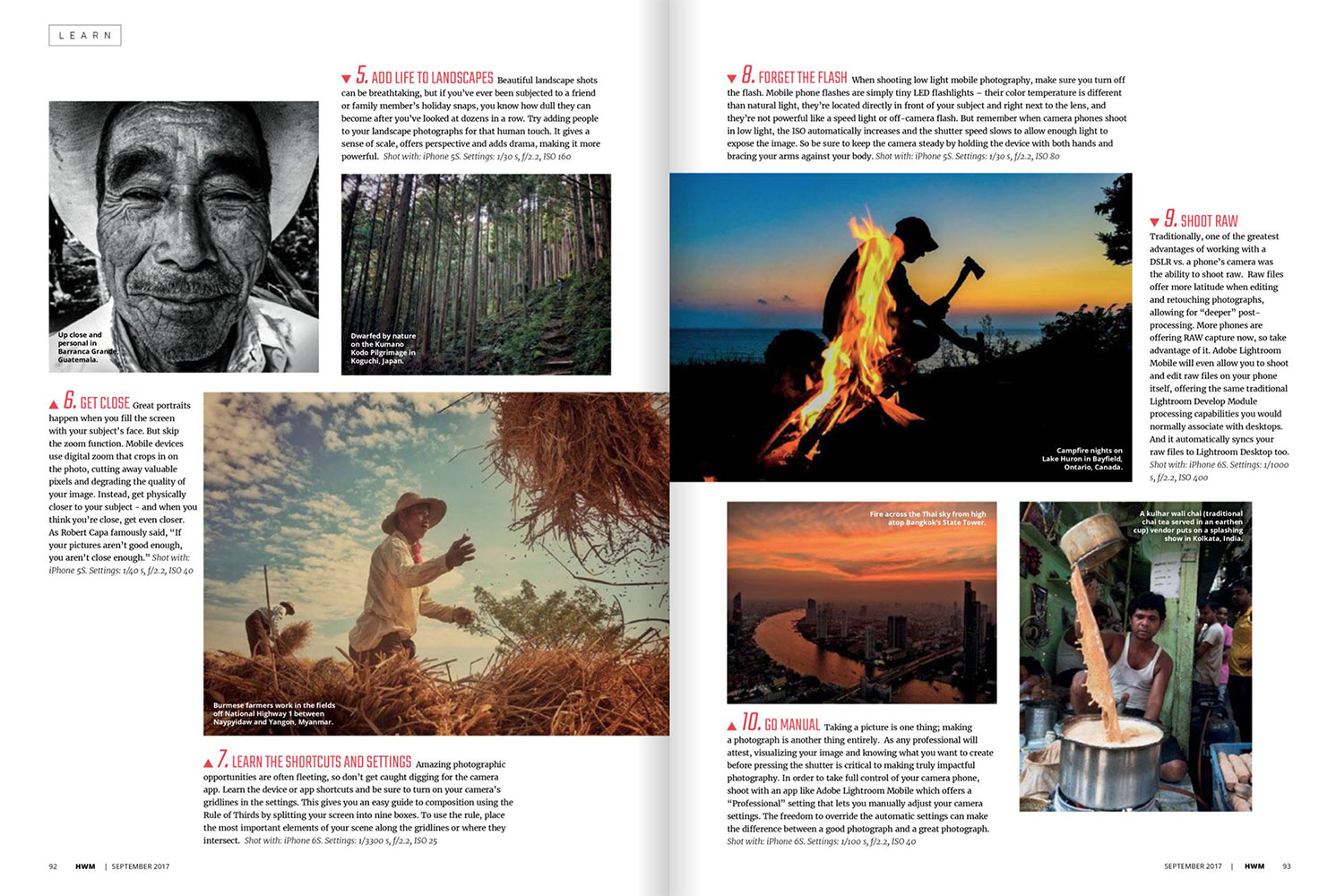 9. SHOOT RAW  Traditionally, one of the greatest advantages of working with a DSLR vs. phone’s camera was the ability to shoot raw.  Raw files offer more latitude when editing and retouching photographs, allowing for “deeper” post-processing.  More phones are offering raw capture now, so take advantage of it.  Adobe Lightroom Mobile will even allow you to shoot and edit raw files on your phone itself, offering the same traditional Lightroom Develop Module processing capabilities you would normally associate with desktops.  And it automatically syncs your raw files to Lightroom Desktop too.

10. GO MANUAL  Taking a picture is one thing; making a photograph is another thing entirely.  As any professional will attest, visualizing your image and knowing what you want to create before pressing the shutter is critical to making truly impactful photography.  In order to take full control of your camera phone, shoot with an app like Adobe Lightroom Mobile which offers a “Professional” setting that let’s you manually adjust your camera settings. The freedom to override the automatic settings can make the difference between a good photograph and a great photograph.