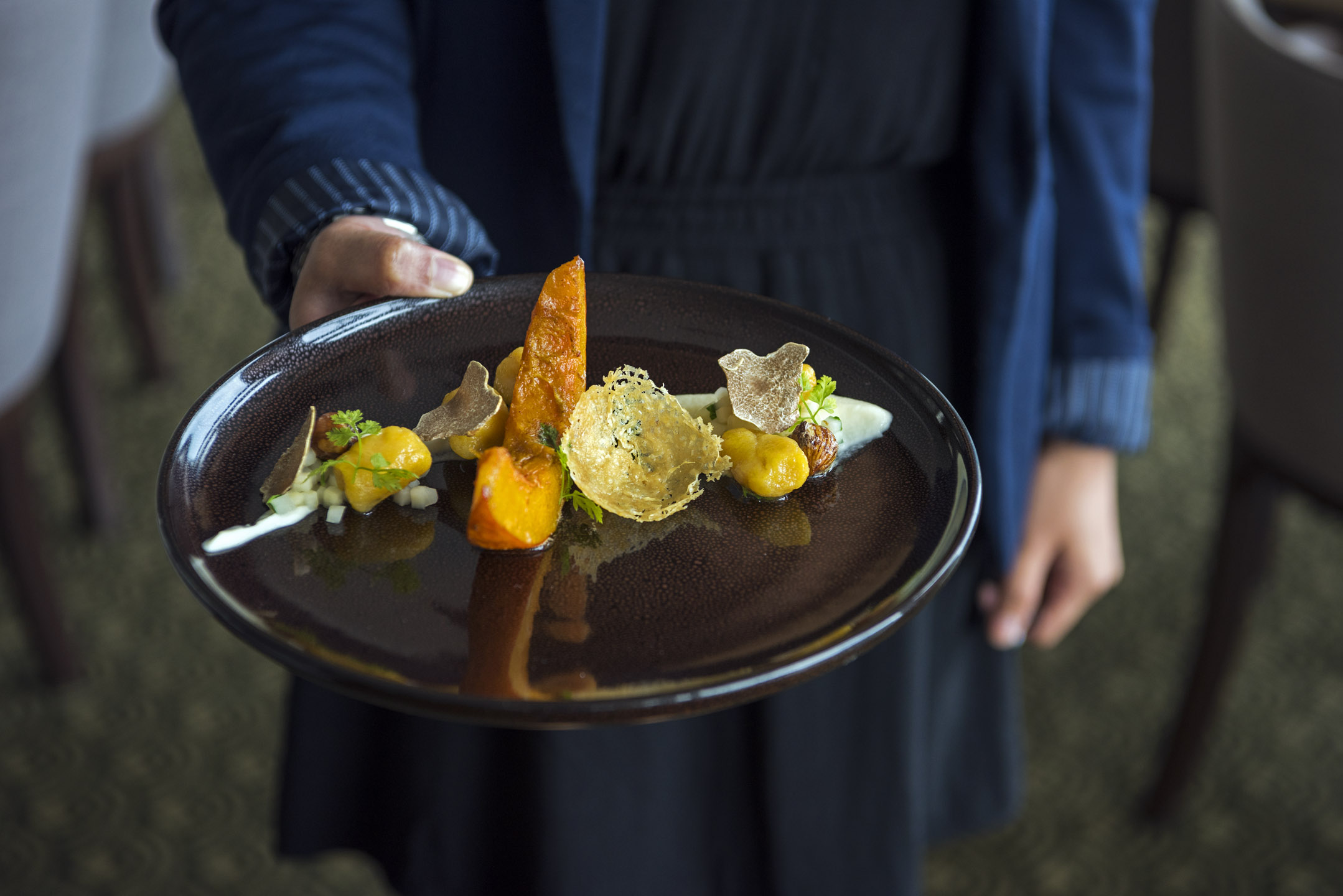 Straight to the Top

From 40 floors above Singapore, Colombian chef Fernando Arevalo sets
the bar — and his sights — high when sourcing ingredients for his menus.

I recently had the pleasure of spending a morning with Chef Fernando in his kitchen at
Artemis Grill while on assignment for the January 2017 issue of Travel + Lesiure Southeast Asia. 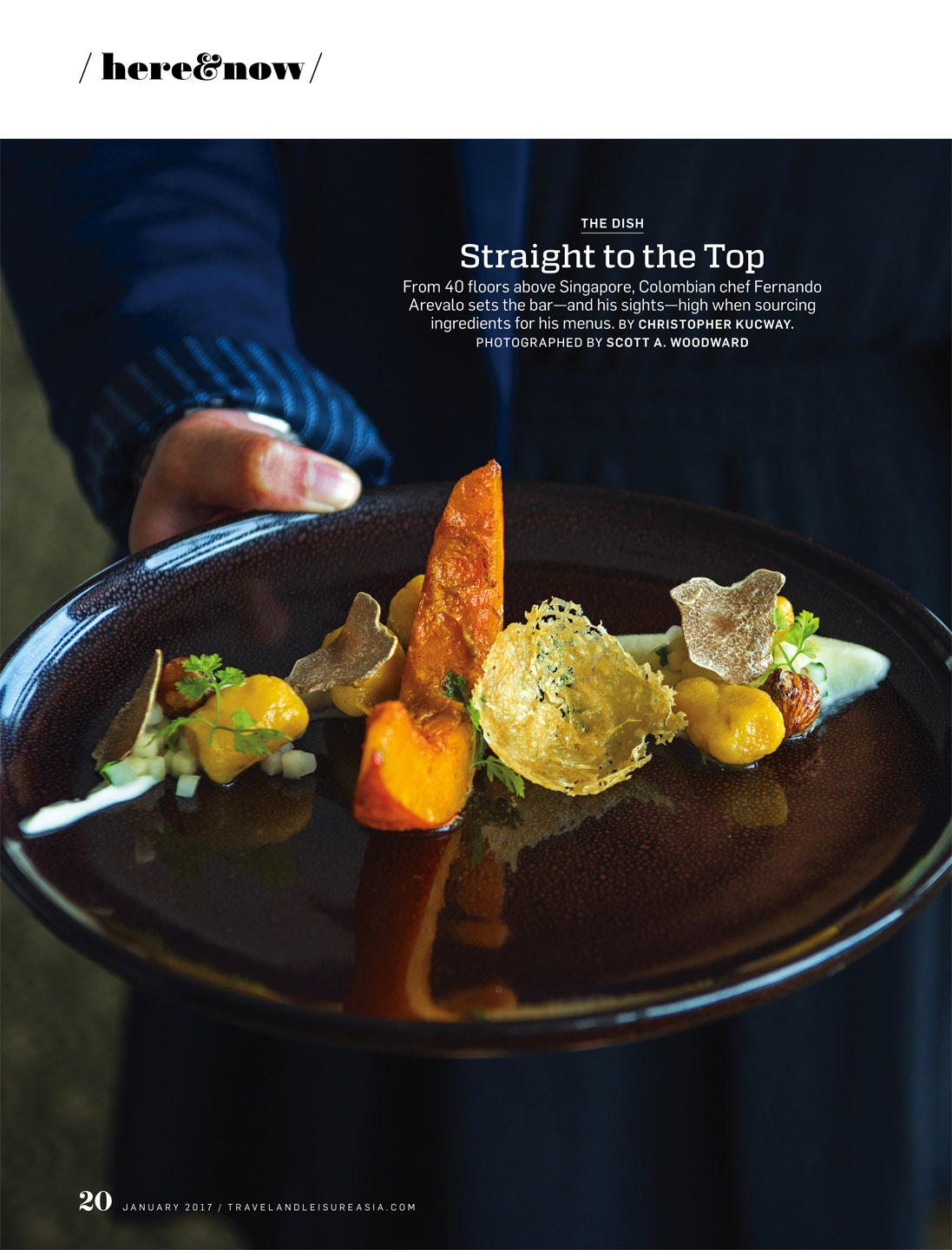 When Fernando Arevalo is not out in the world sourcing ingredients for Artemis, his restaurant in Singapore, the world tends to come to him.  That’s one of the perks of being a bigname executive chef in one of the globe’s leading cities.  “Every week, someone comes to my kitchen with a basket of magic,” the Colombian tells me over coffee one morning before the kitchen heats up.  A day earlier, he says, one supplier arrived with some chervil from France, a sweet member of the carrot family, and, as Arevalo put it, “I went nuts.”  It was actually the little-used root of the plant that stirred both his imagination and his taste buds, its aniseed-like flavor to be used in, say, a soup, the thirty-something chef tells me.

Step aside locavores, finding the best of the best regardless of where it comes from is back in vogue.

Sourcing ingredients from all over the world — yes, that’s a marketing tool or, as Arevalo puts it, “it makes you want to brag” — Artemis is not alone in the breed of top restaurants where quality is sought at any cost.  Step aside locavores, finding the best of the best regardless of where it comes from is back in vogue.  Arevalo’s pedigree is as distinct as the ingredients he chases. He’s toiled under Daniel Boulud in New York City, in a Michelin-starred kitchen at Telepan Restaurant in the same city, and for Mario Batali in Hong Kong. Now, he’s running his own show.  “As you grow, you start understanding how important it is to go back to the source, to go back to the land.”

Admittedly, it is a delicate balance between sourcing quality ingredients and his insistence on sustainable methods of growing. Arevalo says suppliers in Asia are at the top of his list, but Europe and Australia are close behind. So he makes sure to work with what he considers ethical suppliers.

From its 40th-floor perch in an energy-efficient office tower, Artemis has sweeping views of the urban dynamo that Singapore has become.  Modern office blocks of the city center sprout into the equatorial sky.  Glassy and chic, the restaurant itself features an outdoor bar encircling an olive tree.

“We found someone in Majorca who is super passionate about his oil, about his trees,” Arevalo tells me.  Like the grower, this dedicated chef wants to know the traceability of the oil.  Who harvested the olives?  Who pressed the oil?  His producer knows.

That also means grassfed and hormone-free meats, as well as a large selection of vegetarian and gluten-free dishes.  Come autumn, it means seasonal dishes dotted with figs, pumpkins and carrots.

The culture of food, he says, doesn’t emanate from fancy restaurants but from what people, regardless of where they are, eat on a daily basis.  Local food, not necessarily fancy menus.

Arevalo’s most recent fling outside the confines of his kitchen was an eight-day, all-in road trip through France.  Caviar, oysters, butter, cheese. Normandy, Brittany, the Massif Central, Paris.  Like the food chain he follows, it all ended just outside of the French capital at Rungis, the famed food market.  There, Arevalo was a known entity, the face of Artemis recognized for demanding quality ingredients and ready to pay top dollar for them.

But does this approach run the risk of becoming as lofty as the restaurant’s location?  Arevalo smiles, rolls his head and politely disagrees.  The culture of food, he says, doesn’t emanate from fancy restaurants but from what people, regardless of where they are, eat on a daily basis.  Local food, not necessarily fancy menus.  In food-mad Singapore, he counts ban mian in that equation.

With that, encased in glass, amid modern urban Asia, and out of coffee, Arevalo leaps out of his chair.  “I want to show you these pumpkins, you’re going to flip out.”  Sourcing, tasting, cooking, it’s all a jolt to his system.  Out comes a tray of the strangest shaped and colored pumpkins I’ve ever seen — one is white and flat like a Frisbee, another is phallic-shaped — French gourds that diners in this citystate will indulge in over the coming days.  “Right now,” Arevalo beams, “Singapore is the best place in the world.” 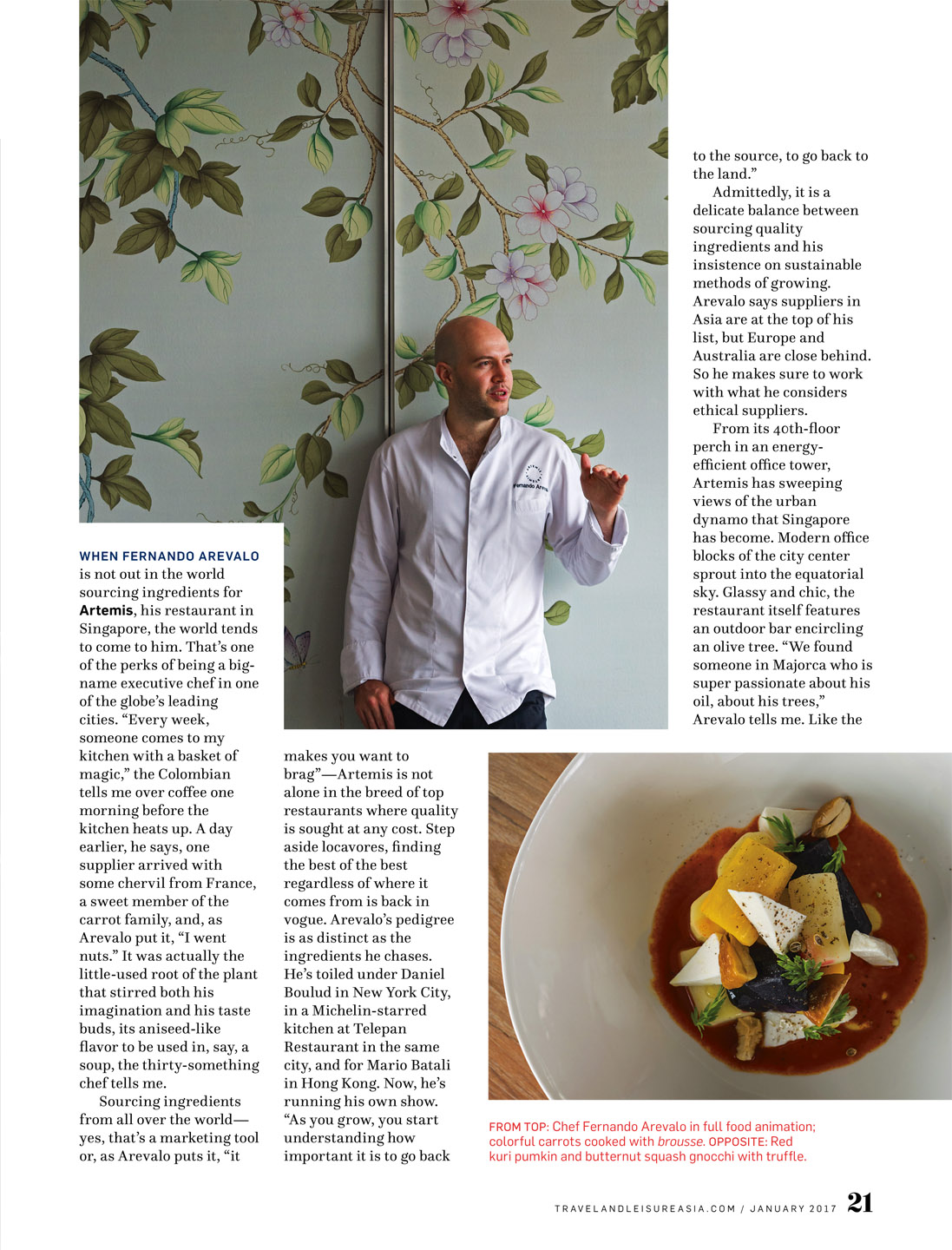 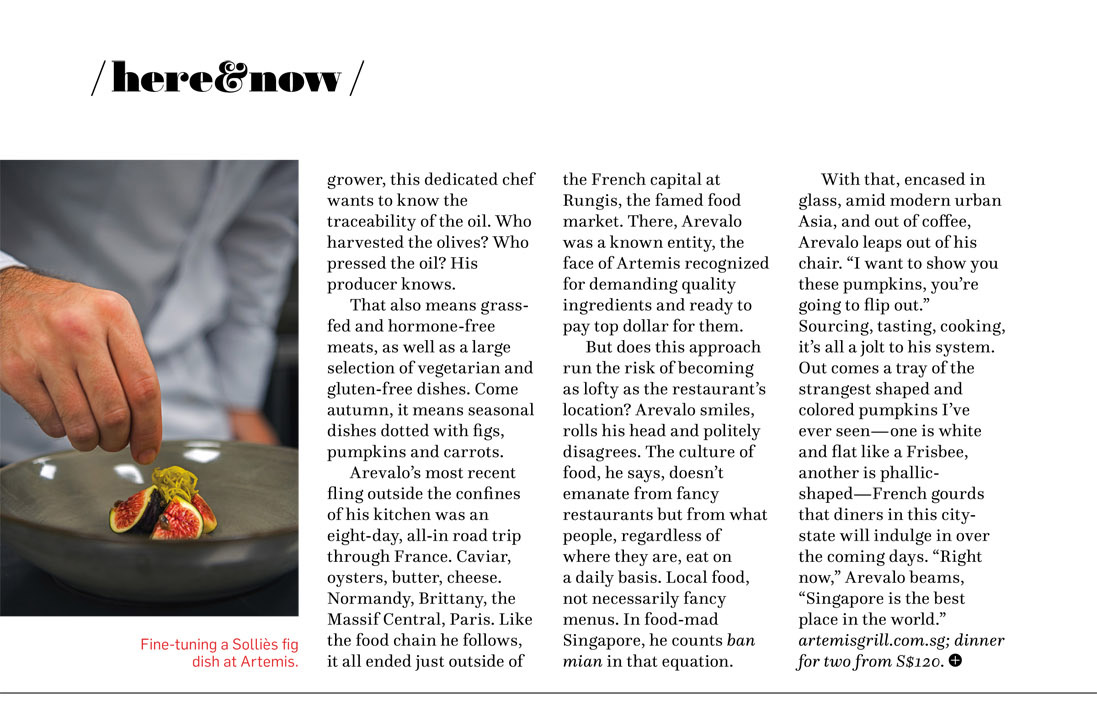