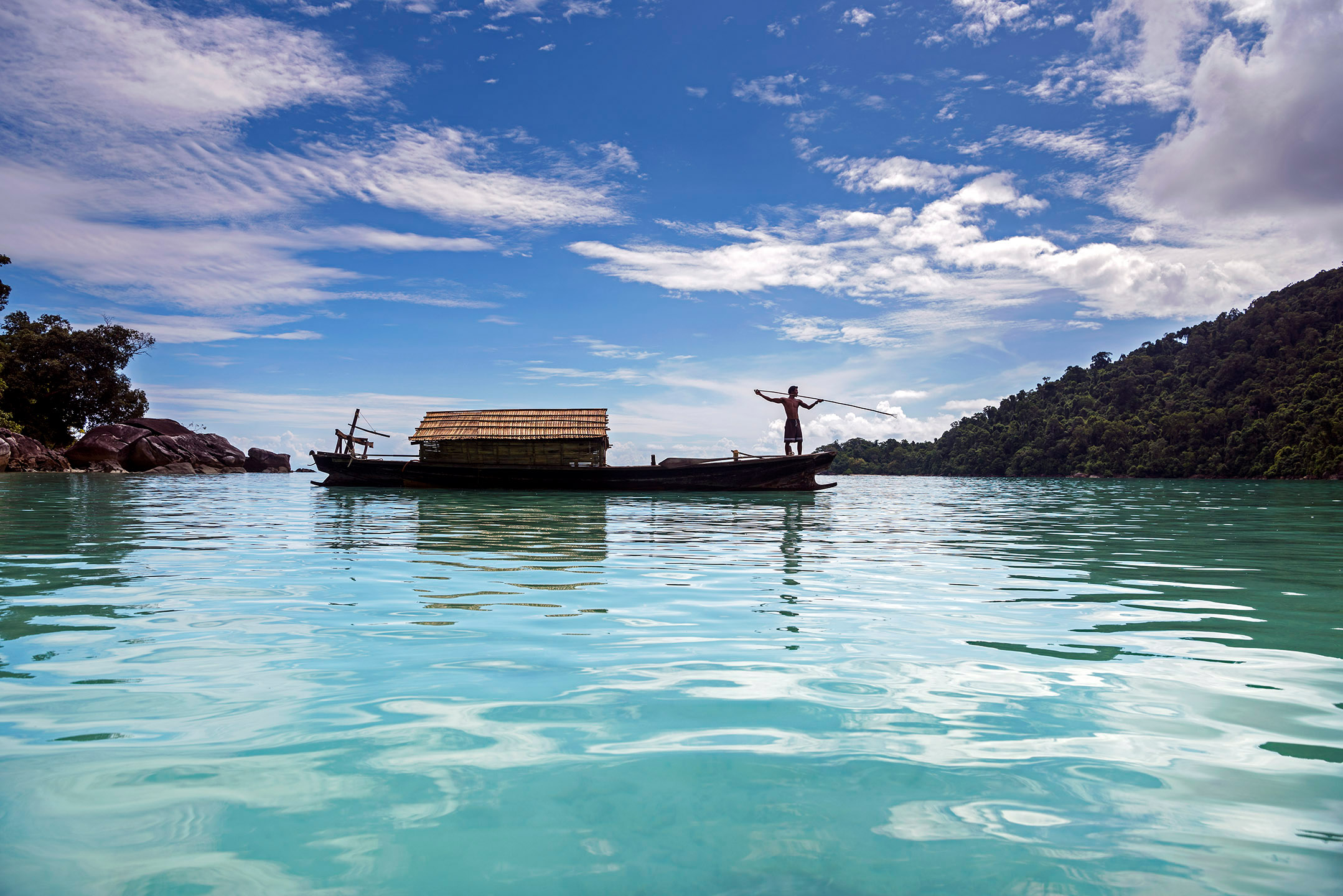 With their nomadic lifestyle under threat, the once-seafaring Moken people of
Thailand’s Surin Islands are now hoping tourism can safeguard their future.

This past October, SilkAir’s Silkwinds editor Nick Measures and I traveled to the idyllic jungle-fringed beach of Ao Bon Yai on the tropical island of Koh Surin, a national park located 60km from the Phang Nga mainland and a few hours north of Phuket.  We went to meet the Moken, a small community of formerly nomadic people who “used to spend their lives at sea, travelling between the islands of Myanmar and Thailand and surviving off what they could harvest from the ocean and the land.”

As Nick explains in our December 2017 cover feature, “that life is fast becoming a distant memory for the Moken, who due to tighter government controls have been forced to adopt a more sedentary existence over the past 30 years.  The threats of border patrols and unscrupulous fishing operations mean that these once-stateless people now fear the open water they used to call home.  Instead they find themselves forced to eke out an existence within the constraints of modern society, bound by the rules of the national park they now live within.”

Nick and I experienced a glimpse of their struggle during the three days we spent in their small beach community of 300 people.  “Tourism now holds major sway over the Moken people.  Located in a national park that’s a big draw for snorkelling tours thanks to its empty beaches, clear waters and abundant coral, their village has inadvertently become something of a sideshow for visitors.”

As “depressing as it may be, these tourists are also the main source of income for most of the Moken, who have started selling handmade bracelets and wood carvings.  The only alternative employment is menial jobs on the speedboats for the men, or work as cleaners and cooks at the park headquarters for the women.  In both cases, this is tough work and limited to the dry season, when the park is open.”

This is where the Moken Tourism Team comes in: first initiated as the Andaman Pilot Project a year after the 2004 tsunami and now helmed by community-based tour operator Andaman Discoveries who in 2010 “began working with the group to train guides” and since 2012 “have been running a series of specialist tours that allow visitors to spend a few days in the village to learn more about Moken customs.”

“Traditionally very shy, it’s clear that opening up to the outside world and embracing tourism still isn’t a very comfortable experience for the Moken”. However, “through the work of the Moken Tourism Team, they are beginning to see that there are ways that they can interact with the outside world, but 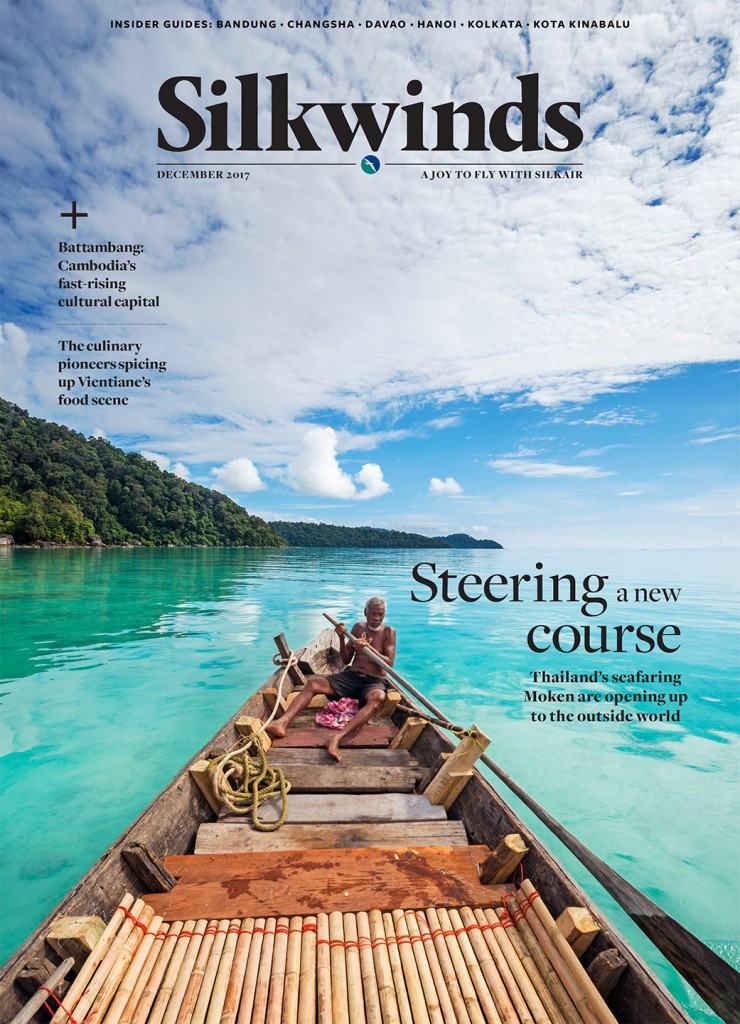 do so on their own terms.  It’s a way forward that offers a chance to keep the community together, despite the pressures and hardships they face.”

Following is the cover and feature that I photographed and Nick authored for the December 2017 issue of SilkAir’s Silkwinds inflight magazine.

Browse a larger collection of the photography I made while on assignment with the Surin Moken. 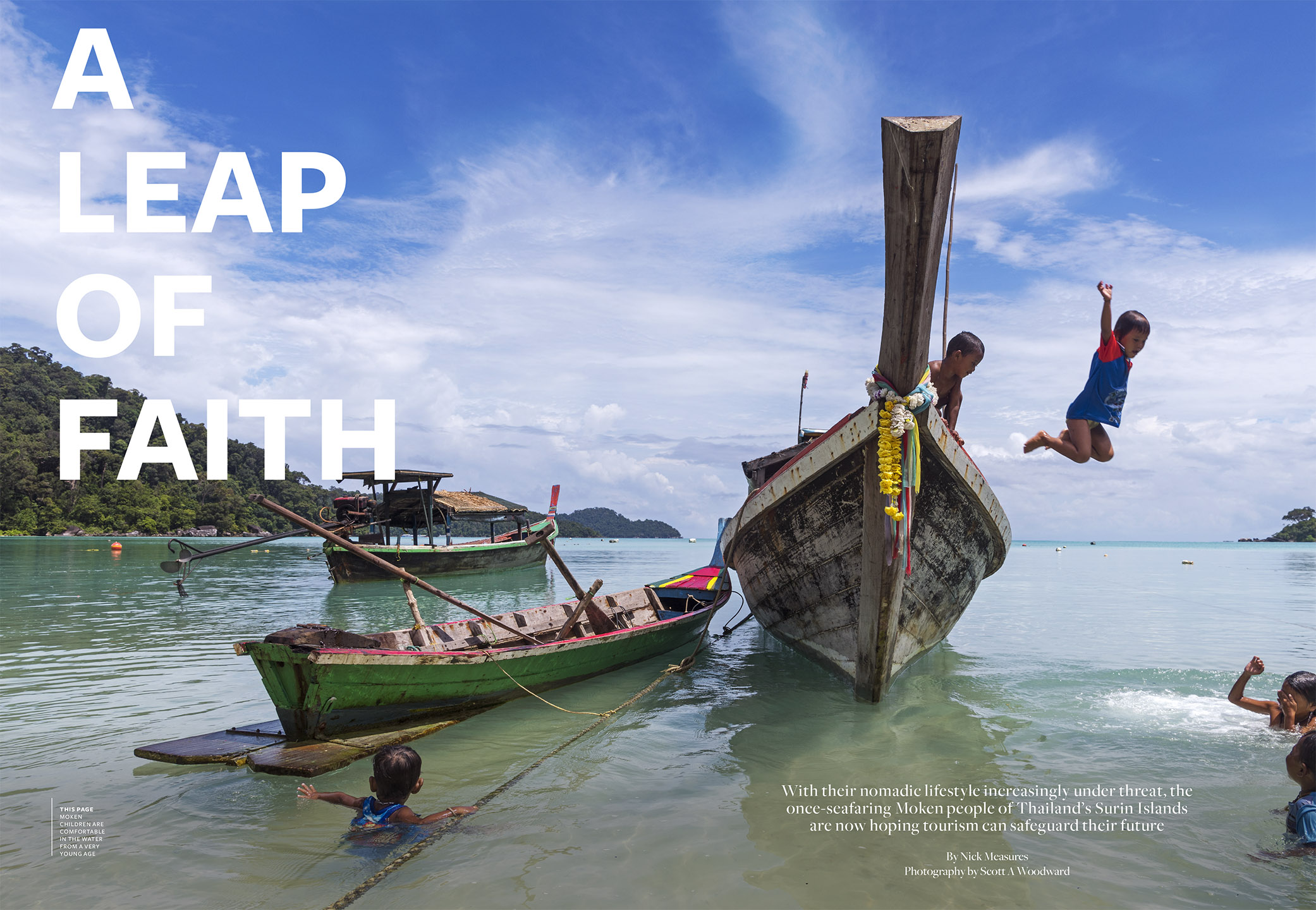 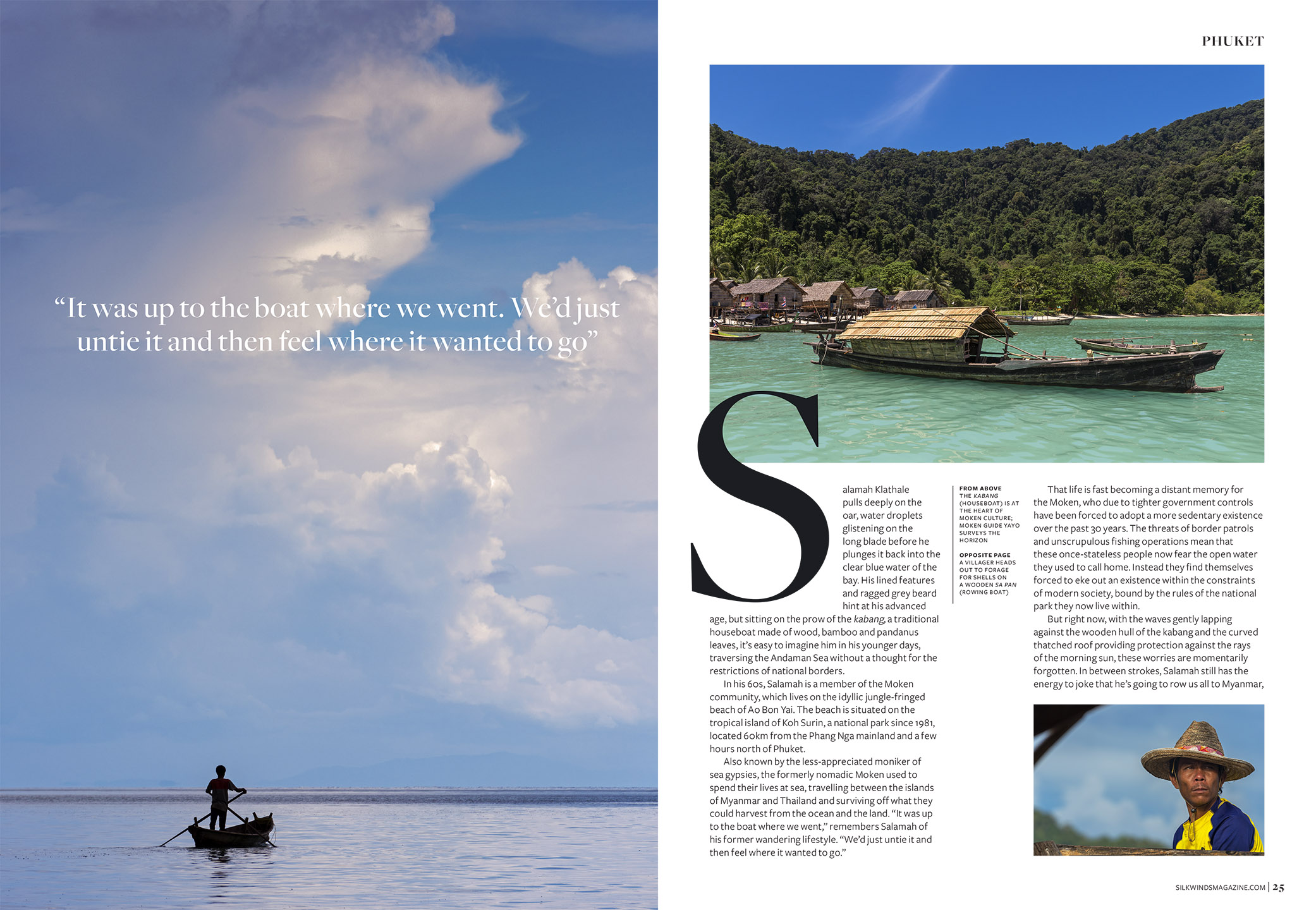 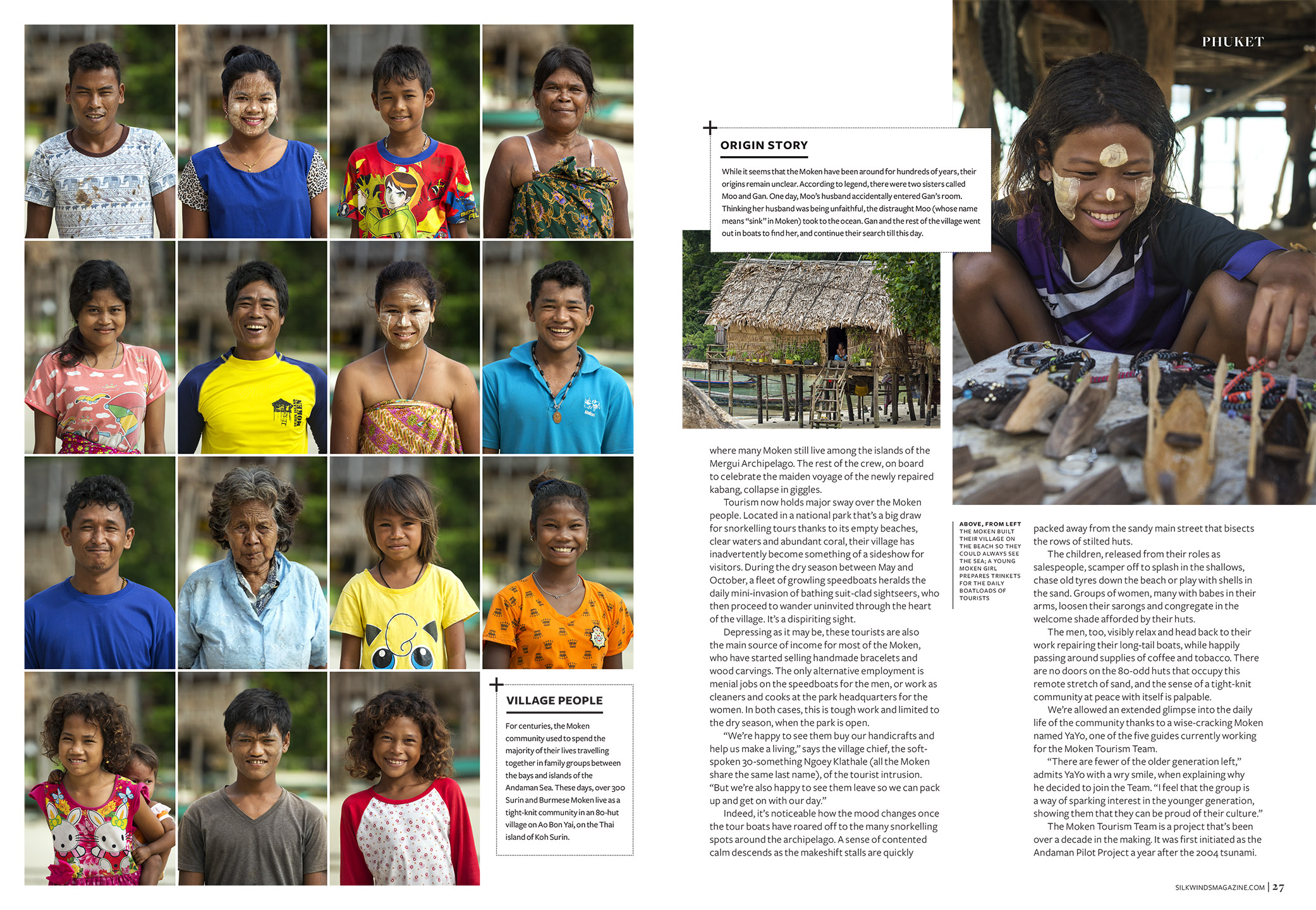 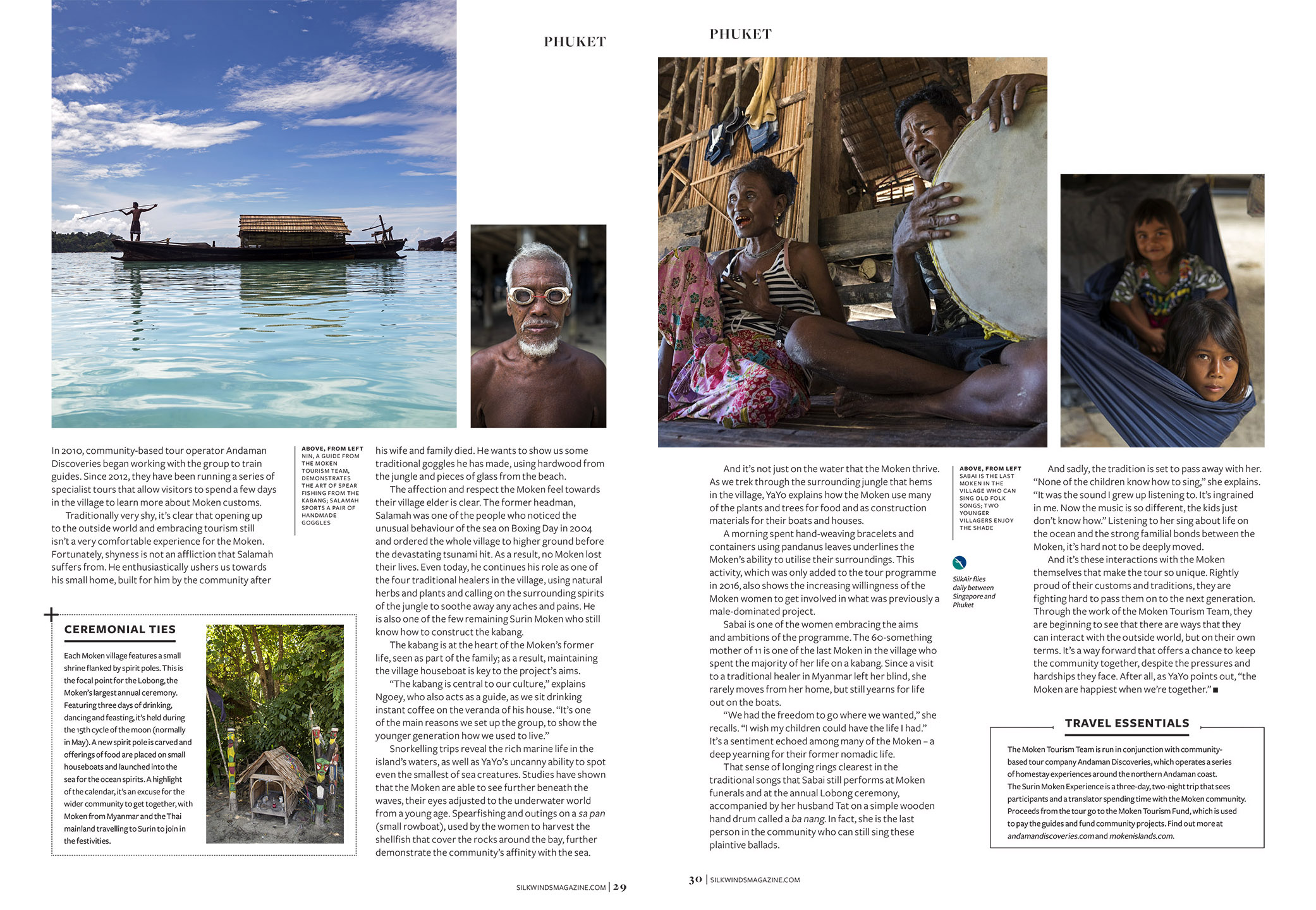 […] Scott Woodward: Last October, I traveled to the idyllic jungle-fringed beach of Ao Bon Yai on the tropical island of Koh Surin, a national park located 60km from the Phang Nga mainland and a few hours north of Phuket, Thailand. I was there to photograph a cover feature about the Moken—a tiny community of about 300 sea gypsies—for SilkAir’s in-flight magazine, Silkwinds. […]