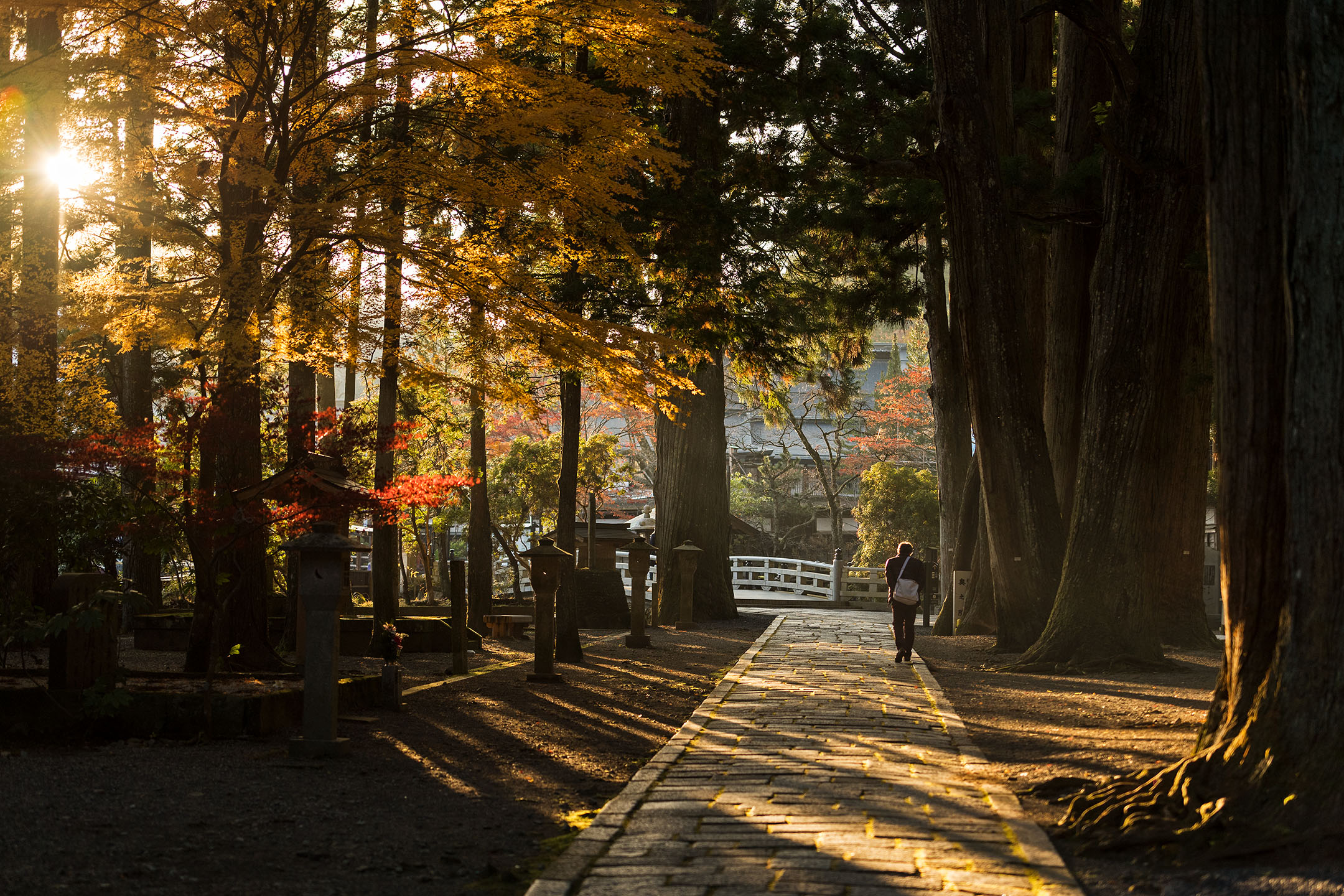 Sometimes it takes a long, meditative walk through an unfamiliar landscape
to reinvigorate mind, body and soul — exactly what photographer
Scott A. Woodward discovered as he trekked the ancient
pilgrim’s path called Kumano Kodo in Japan.

Although I have lived in Asia for more than 20 years, it’s only in the past four years that I have had the privilege of traveling to and experiencing Japan.  However, in this relatively short period of time I have visited the Land of the Rising Sun more than a half-dozen times — and during these few months I’ve spent exploring Japan, I’ve felt a true affinity for the people and the nuances of the culture.

In fact, perhaps since I first visited Asia as a teenager in the early 1990s, I feel a true sense of culture shock whenever I am in Japan.  Peculiar as it may seem, feeling like an outsider exhilarates me.  I am well aware that I have only scratched the surface of Japan — but honestly, it now feels like an itch that I can’t seem to stop scratching.

So I was thrilled when I was given the assignment to trek and document the ancient and historical Kumano Kodo pilgrimage for Travel + Leisure Magazine in November 2016.  Until that point, my travel in Japan consisted of only the nation’s major metropolitan centres, so an opportunity to wander and experiece Japan’s natural splendor was absolutely exciting for me.  Further, UNESCO only recognizes two religious pilgrimage routes in it’s World Heritage records: the first is Spain’s renowned Catholic journey, the Camino de Santiago, and the the other the Kumano Kodo, Japan’s very own passage through nearly a millenia of Buddhist history and culture.

The Kumano Kodo pilgrimage is situated on Honshū Island’s isolated, precipitous Kii Peninsula.  The journey begins in modern, manic Osaka before winding its way overland via train to the mountain temple community of Koyasan, where the trek begins in earnest.  Over the next nine days and 90km, our pilgrimage twisted through ancient forests, rising and falling countryside, centuries’-old cemeteries and modest Japanese communities, punctuated by steep climbs and sharp descents as we wound our way through Tanabe, Takahara, Tsugizakura, Yunomine, Koguchi Nachi Taisha, Katsuura, Shingu and Ise, tracing 900 years of Buddhist antiquity, all connected by the three remarkable and resplendent Kumano sanctums: Hongu Taisha, Nachi Taisha and Hayatama Taisha Shrines.  Along the pilgrimage we stayed in humble pilgrim lodgings, charming Japanese inns and luxury Japanese resorts. But every night ended in similar fashion: with a beautiful feast of local delicacies and a steaming onsen (hot spring bath).

The most striking part of the pilgrimage was how spiritual the experience felt to me.  I am not a religious person, but I couldn’t help but feel a transcendent energy throughout my time wandering the Kumano Kodo: the scent of giant cedar trees swaying in the breeze, the trickle of clear streams winding beneath wooden footbridges, the brilliant green moss enveloping ancient stones on which we strode.  There were times when we would go hours without seeing another living soul — and it was then, in total silence, alone with my deepest thoughts and surrounded by breathtaking natural grandeur, that I was able to let my mind open wide and float freely.

At the beginning of the walk, I felt anxious: Did I pack the correct camera gear?  Would it rain on us and make photography impossible?  Would I be able to make photographs that did justice to the wondrous natural landscapes that we were certain to experience?

During the middle of the walk, I felt energized: the trek was beautiful, the natural and architectural beauty we witnessed was outstanding, and the characters we encountered along the route were fascinating.

Toward the end of the walk, I felt at peace: nine days spent predominantly in the forest, completely swaddled by Mother Nature, has a way of calming the mind, body and soul.

Living in the hyper-frenetic city-state of Singapore, long walks in nature aren’t something I get to do very often while at home.  However, I am fortunate that my career as a documentary travel photographer takes me around the world, often placing me in spectacular natural landscapes.  Whether I am rambling through the ancient forests of Japan, hiking in the mountains of Bhutan, roaming across the craggy Mongolian steppe or traipsing through the jungles of Indonesia, being in nature with just my camera and my thoughts is a special and meaningful experience.

Browse my photo essay, featuring a handful of my photographs from the Kumano Kodo, in February’s Cebu Pacific SMILE Magazine.  And explore a larger collection of the photography I made on the ancient pilgrim’s path on my website. 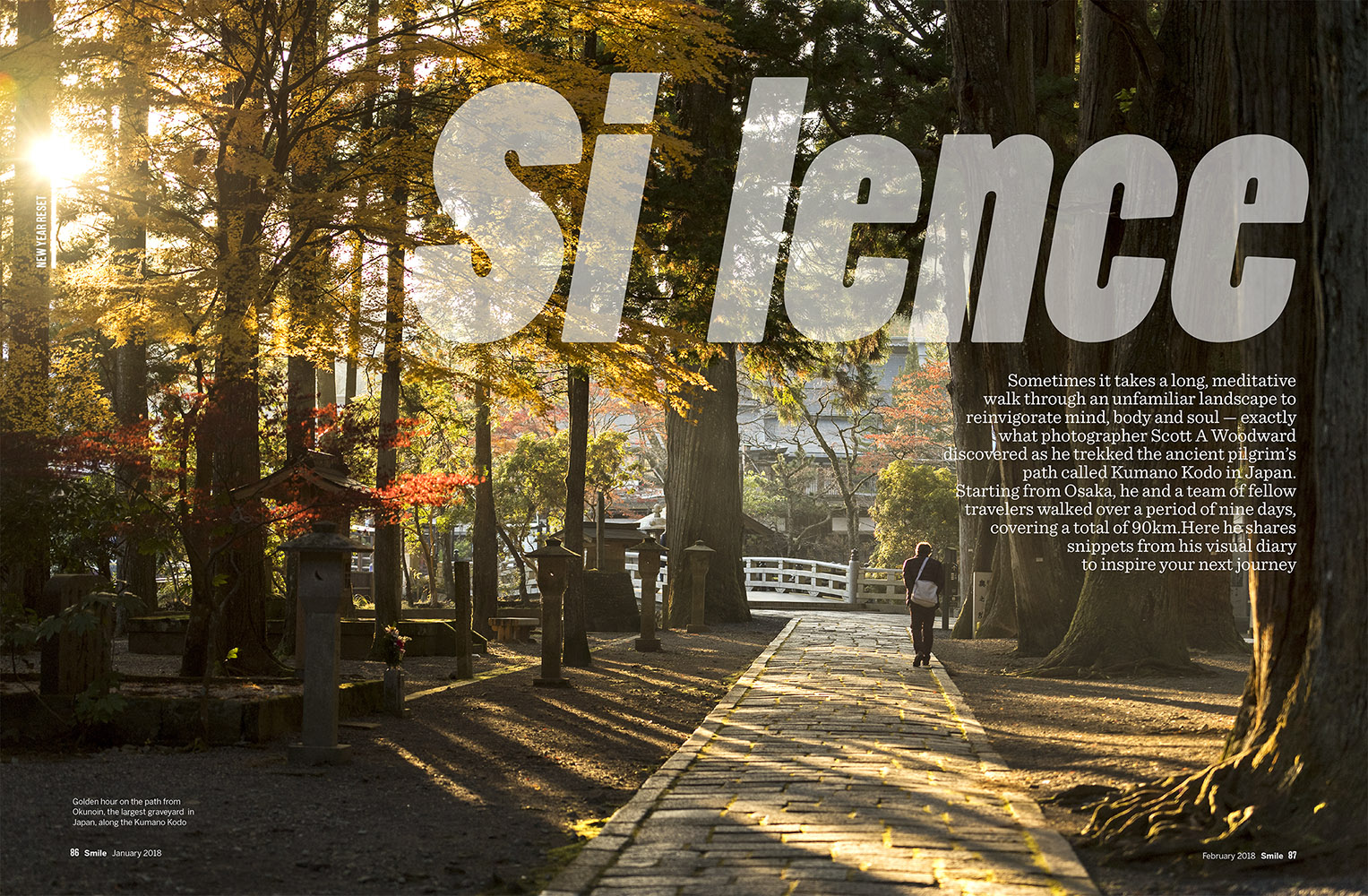 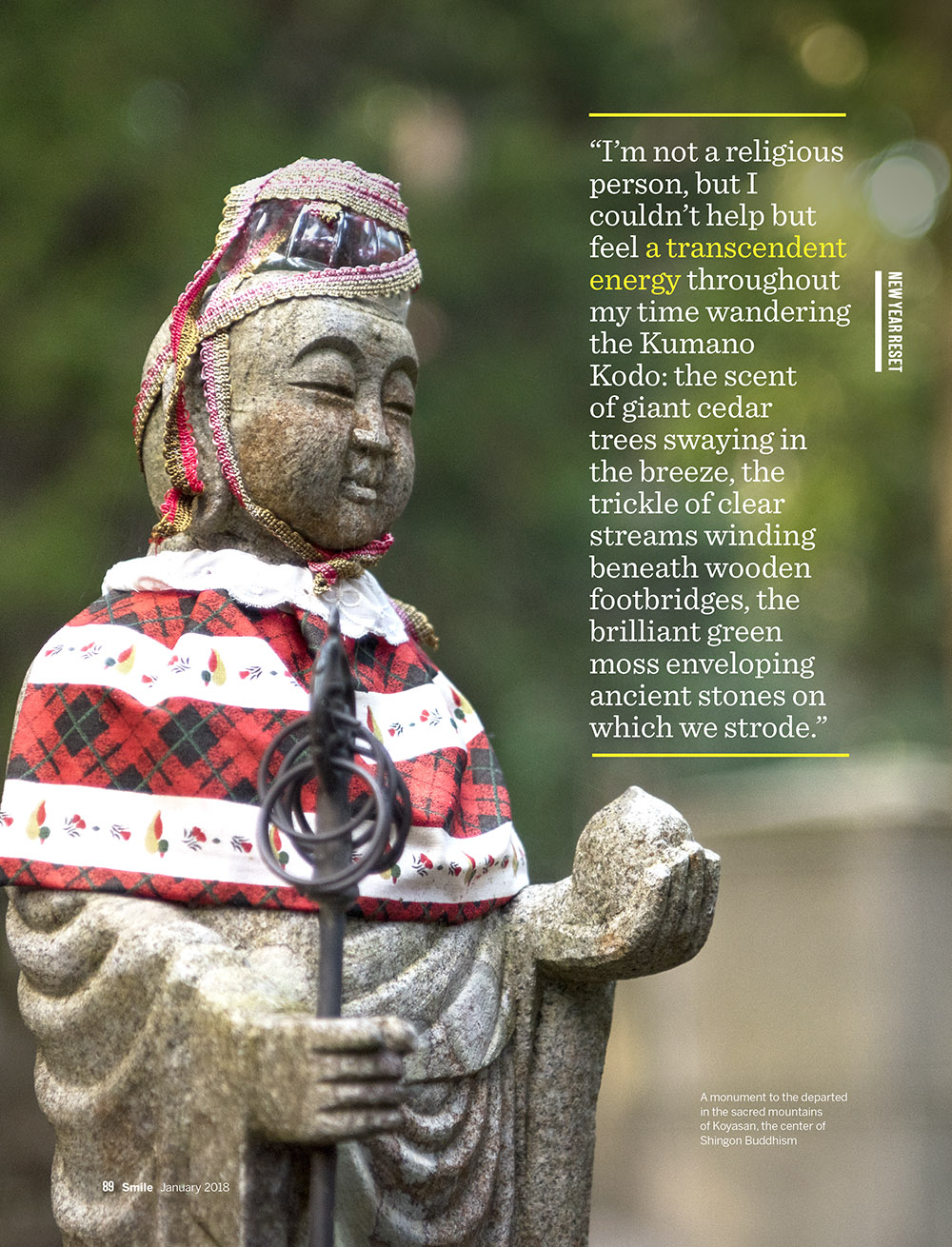 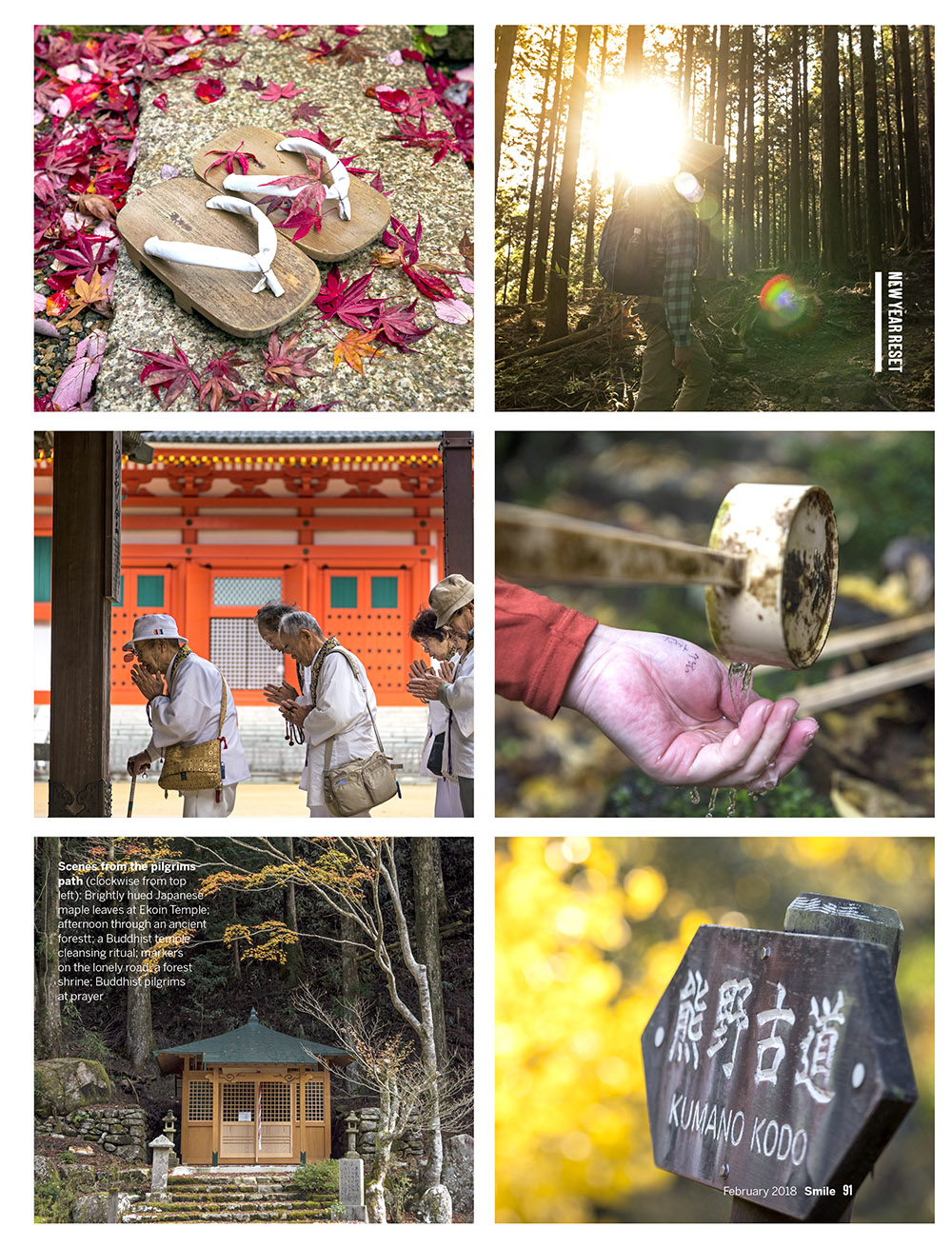 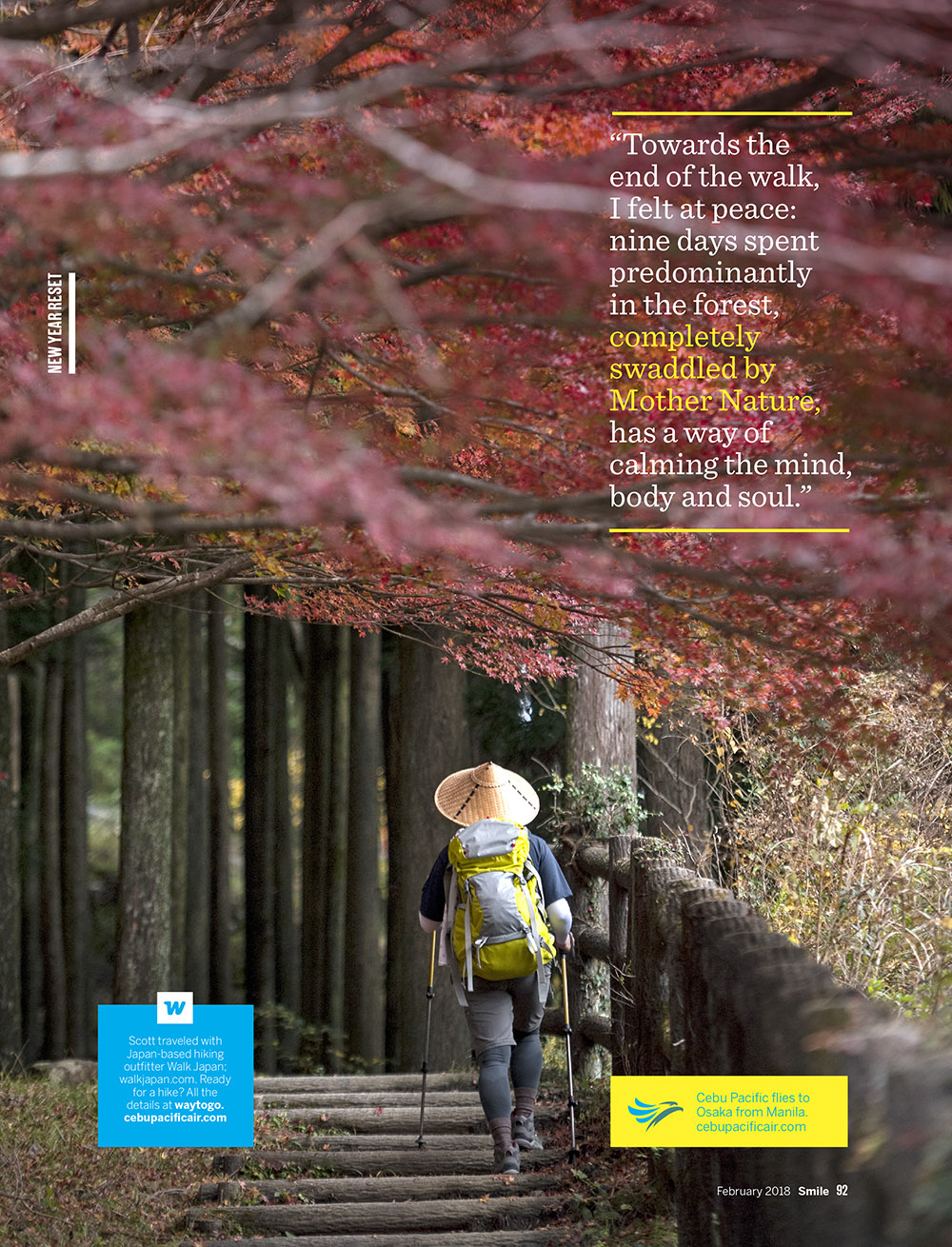