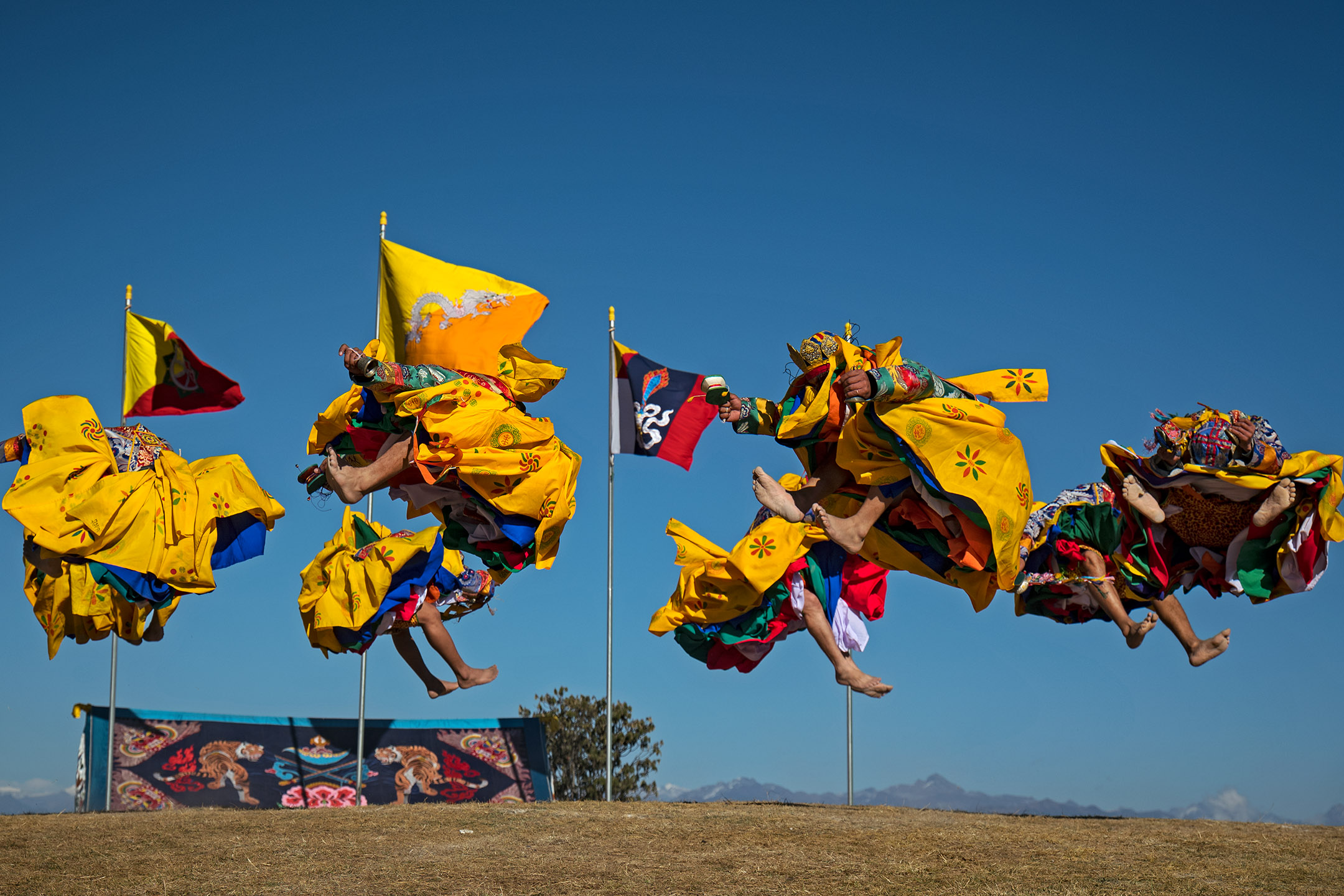 To make this photograph, I was crouched near the front of the grassy stage
where I managed to freeze the performers as they danced and twirled and leapt,
feet and colourful costumes suspended in mid-air, their faces completely obscured.

Nestled in the creases of the Eastern Himalayan mountains, and wedged between the Indian plains to the south and the precipitous Tibetan regions of China to the north, the tiny Kingdom of Bhutan is veiled in mystery. Owing to strict tourism policies that regulate the number of annual visitors, the Bhutanese government has successfully safeguarded the country from the mass tourism that has afflicted many of the country’s Asian neighbours, making Bhutan one of the world’s least-traveled countries.  The small kingdom is home to vast breathtaking topography, disparate climatic regions, and gentle, gracious people with a colourful culture.  Simply, Bhutan is photography nirvana — and the most inspiring destination I have ever documented.

Last year I led “Thunder Dragon Through The Lens”, a custom photography workshop for a small group of photography enthusiasts from around the world.  During our seven-day educational adventure, I shared with the eight participants many of my picture-making tips and visual storytelling techniques, as well as offered them personalized coaching on how to improve their photography skills in one of the planet’s most picturesque destinations.

On one of our final days in Bhutan we traversed the snaking alpine road from Punakha up to Dochula Pass, a 3,150 metre (10,395 foot) Himalayan mountain pass, to experience and photograph the Dochula Druk Wangyel Festival, an annual commemoration of His Majesty Jigme Singye Wangchuck, the Fourth King of Bhutan, and the Armed Forces’ victory over Indian insurgent forces

residing in southern Bhutan in 2003.  The festival is a unique celebration in that all the choreographed dances are performed by the Royal Bhutan Army (rather than the monastery), with the dancers recreating epic stories of gods and warriors, battles and heroes.

To make this photograph, I was crouched near the front of the grassy stage where I managed to freeze the performers as they danced and twirled and leapt, feet and colourful costumes suspended in mid-air, their faces completely obscured.  My image stretches across two pages in the Fernweh opening section of this month’s GEO Saison, Germany’s leading travel magazine.

This is not the first time my work from Bhutan has appeared in the prestigious suite of GEO publications: a number of years ago, a collection of my Bhutan photography appeared on the cover and inside pages of Europe’s GEO Special.  And earlier this year two more of my photographs — a portrait of Alpamys Dalaikhan, a burkitshi (eagle hunter) kissing his eagle in Bayan-Ölgii, Mongolia and a picture of joyous Moken (sea gypsy) children leaping off a traditional long tail boat into the shallow sea at Ao Bon Yai, Thailand — were also published in Geo Saison.

See more of my imagery from the majestic Kingdom of Bhutan in National Geographic Traveller, The New York Times and Travel + Leisure Magazine as well as a Nikon advertising campaign my team and I created high in the Himalayas. 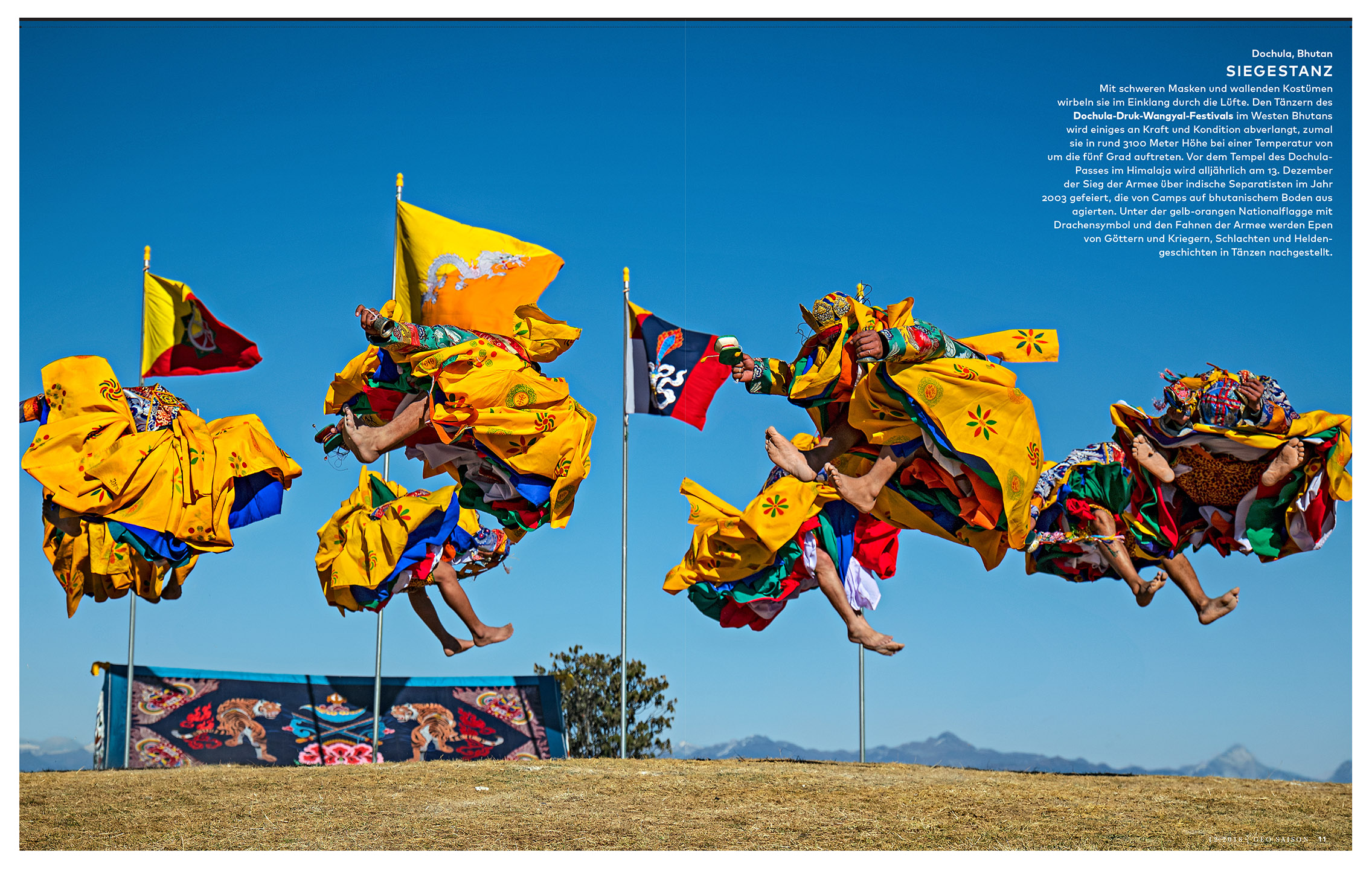