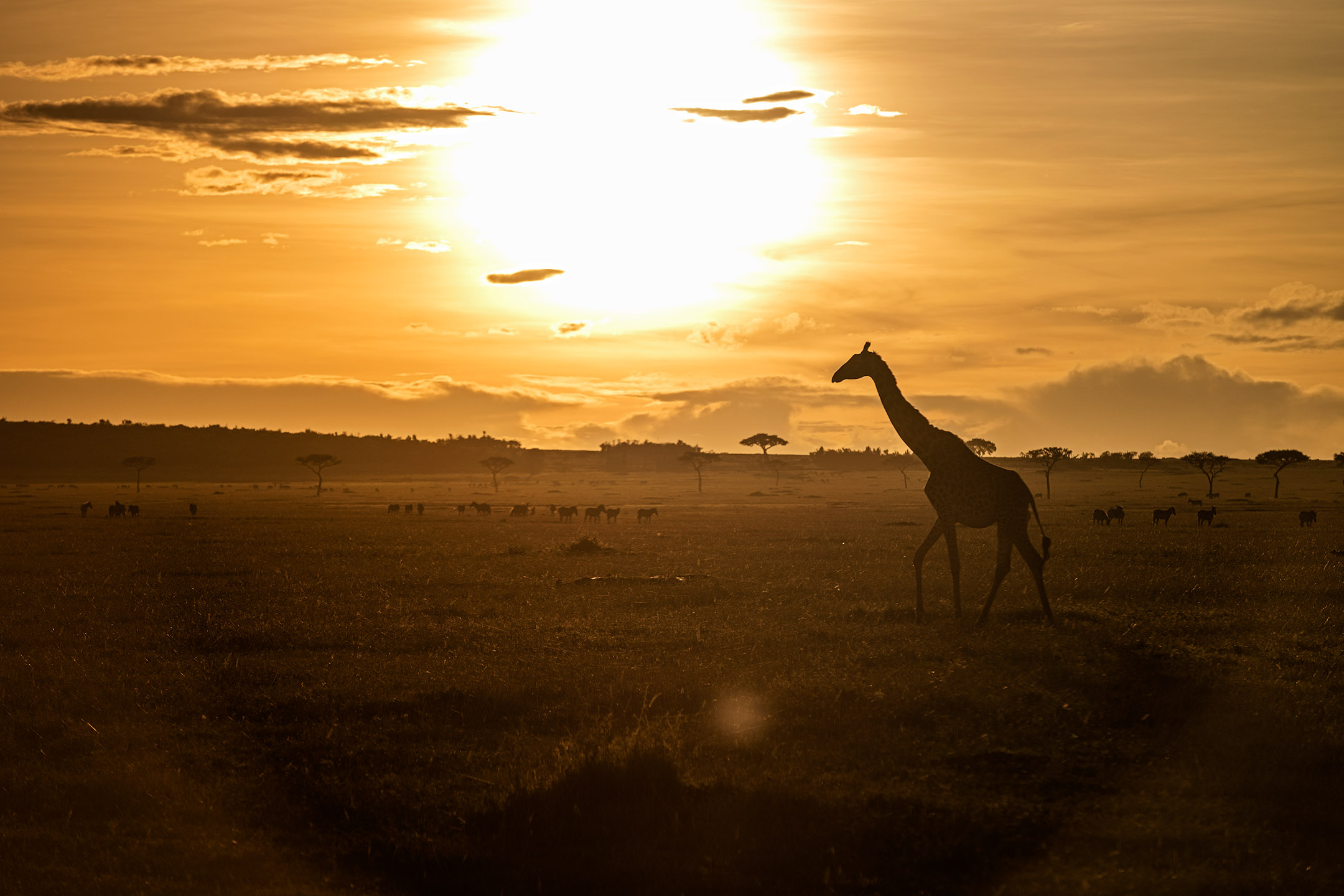 Shooting the Serengeti: 10 Photos That Missed the Cut (But We Still Love)

For the March issue of Travel + Leisure, photographer Scott A. Woodward
takes a walk through the Serengeti. He came back with more photos than could
fit in the magazine; here are a few favourites that didn’t make the cut.

This past November, Travel + Leisure Southeast Asia Editor-in-Chief, Chris Kucway, and I spent five remarkable days on assignment in Tanzania’s magical Serengeti with Alex Walker’s Serian.  The result is a 12-page feature in T+L’s March 2020 issue which is on newsstands this week.

As Chris explains in “Shooting The Serengeti: 10 Photos That Missed the Cut (But We Still Love)”, “unsurprisingly [Scott] ended up with thousands of photographs.  Editing these down to the 19 images eventually used in the print edition omitted some great photos.”  So, together with Chris and T+L’s art director Wannapha Nawayon, we selected 10 additional photographs that we all loved but didn’t make the cut, articulating what drew us to each image and, in some cases, explaining why that specific image did not make it into the print feature.

Browse our story, “The Place Where the Land Runs Forever”, which chronicles the adventure that Chris and I experienced on the Tanzanian savannah. 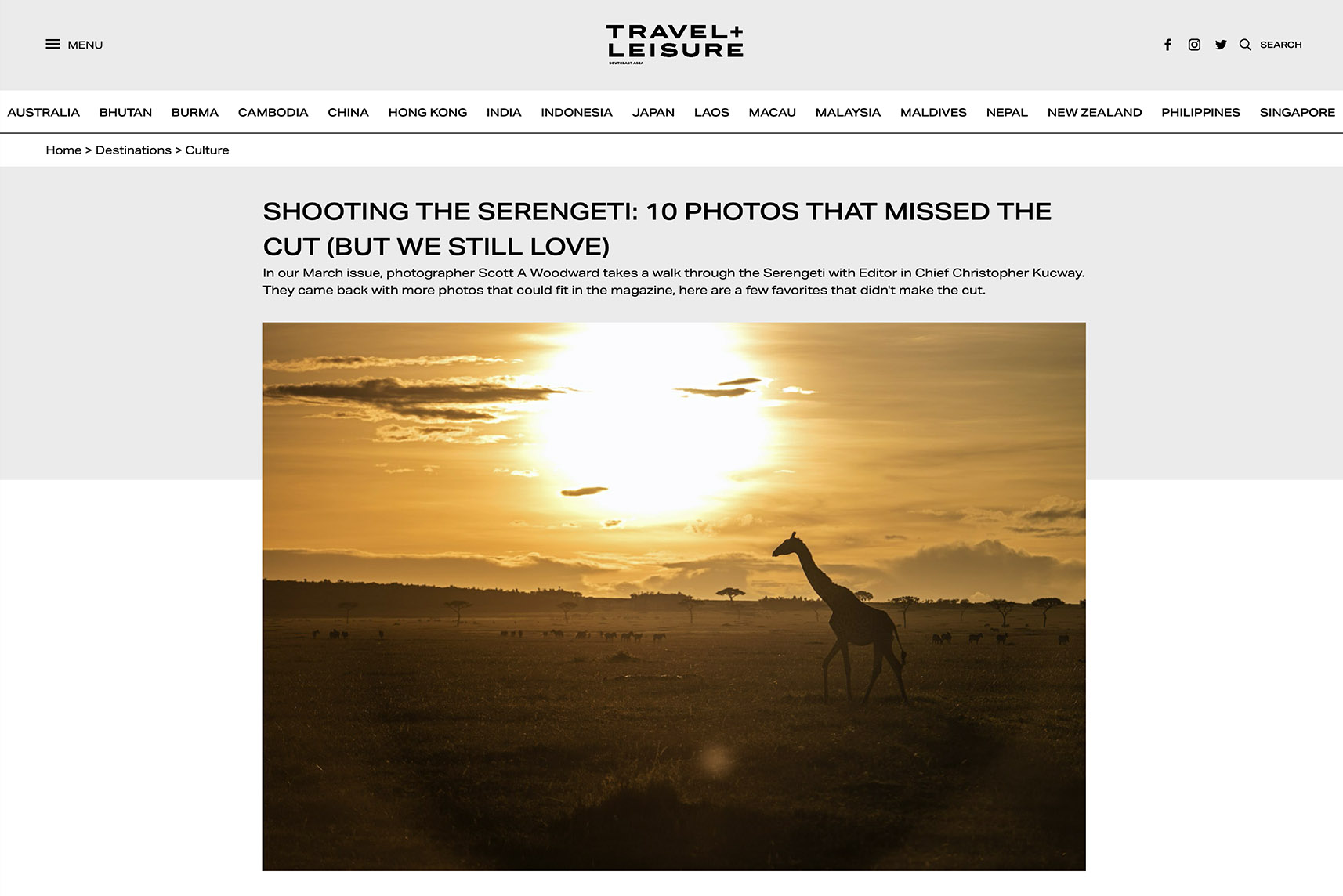 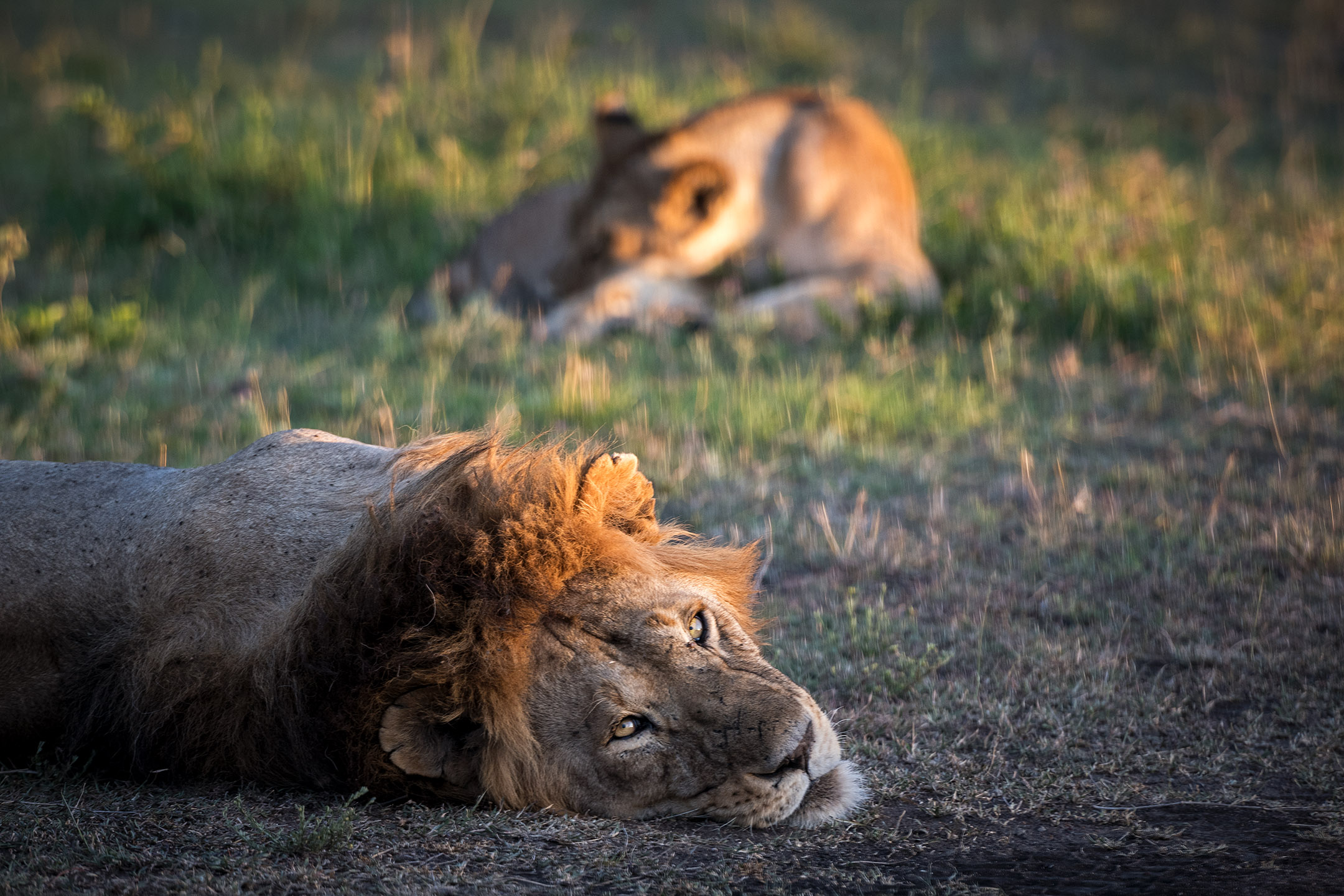 Scott: It was remarkable to me how close we could get to lions when in the Land Cruiser — and how indifferent they were about our presence.

Wannapha: Obviously, Chris and Scott were interfering with the lion’s nap. I’m surprised they both made it back. 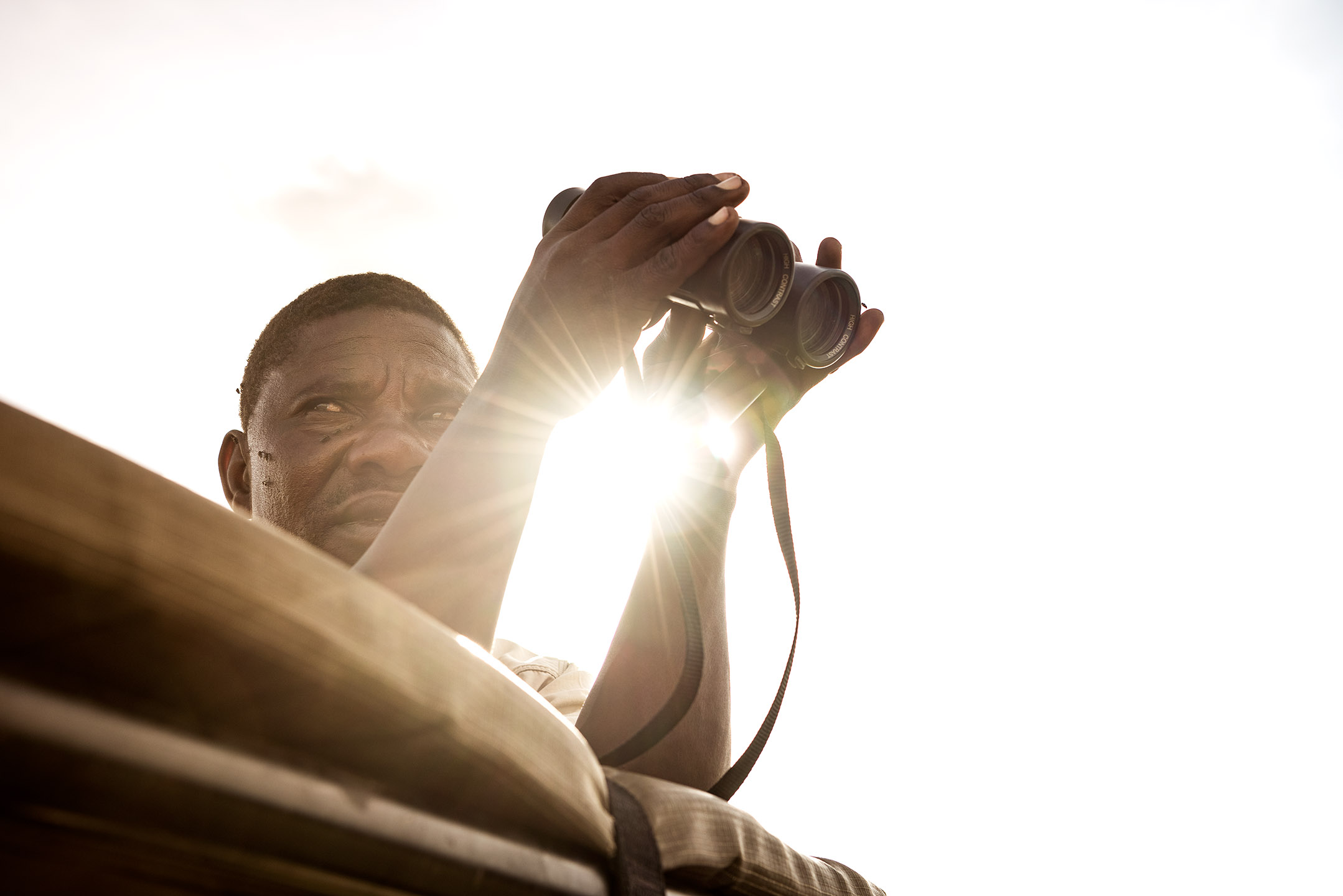 Scott: I love this sunrise photograph of Tabu, one of our Hadza trackers, for the sun bursting between his hands and for the look of intensity on his face despite all the flies.

Chris: This makes me think of Scott stage managing in the wild, muttering under his breath for one giraffe to walk counter-clockwise around us, while all the others headed in the opposite direction. It never works, until it does.

Scott: This photograph is one of my favorites of the entire trip.  I mentioned to Chris that I really wanted a silhouette of one of them against the sunrise. Moments later… 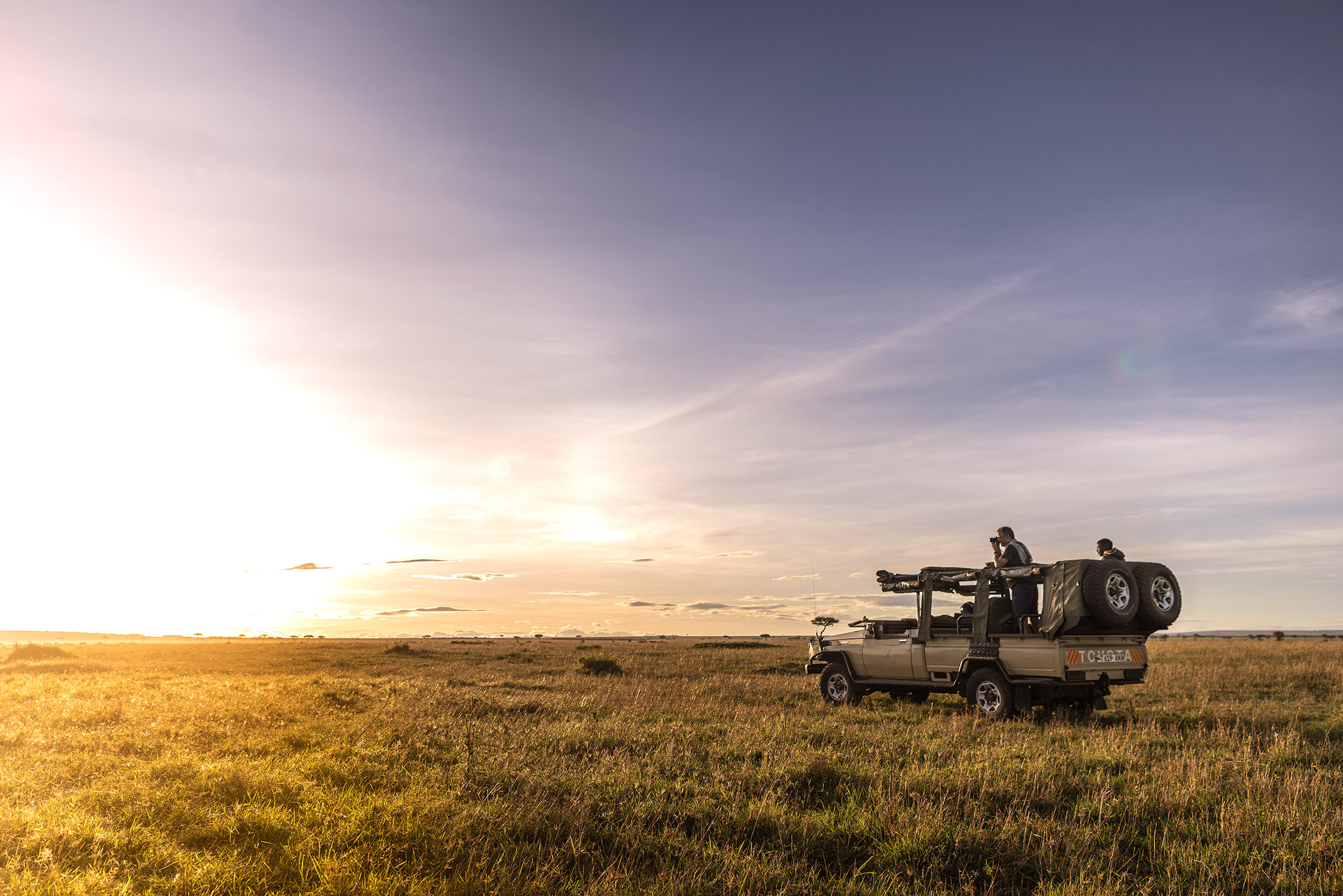 Scott: What I like about this photograph is that it illustrates the true vastness of the Serengeti; the savannah stretches on and on as far as the eye can see.  I also like that I was out of the vehicle when I made this picture and able to offer a different perspective on the driving safari early that very first morning in Tanzania. 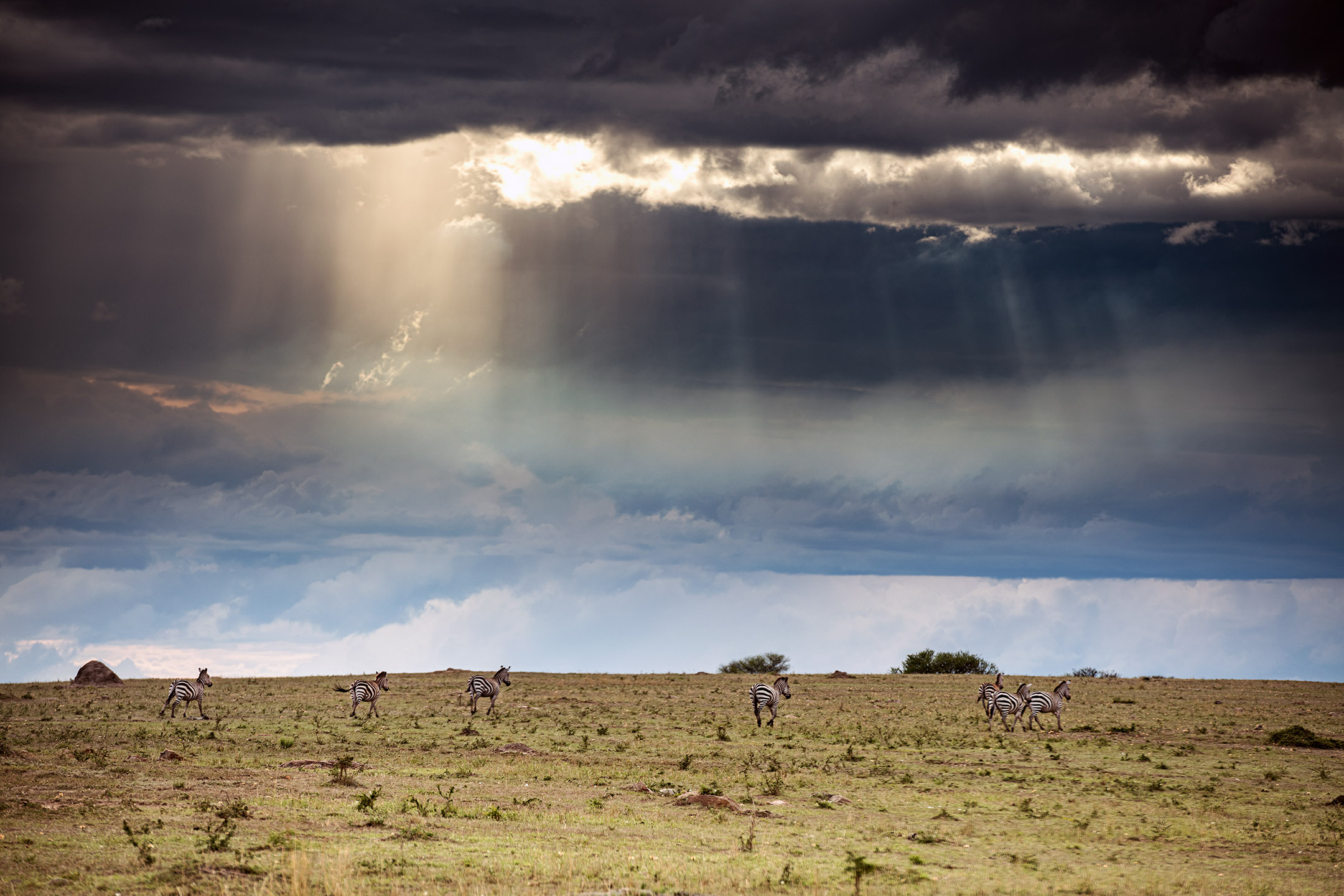 Chris: We’re going to need a bigger magazine.  I mean, seriously, everything about the Serengeti is size wow.

Wannapha: When I first saw this photo, with the beams of light coming from the sky, I thought unidentified flying objects were descending on the zebras. 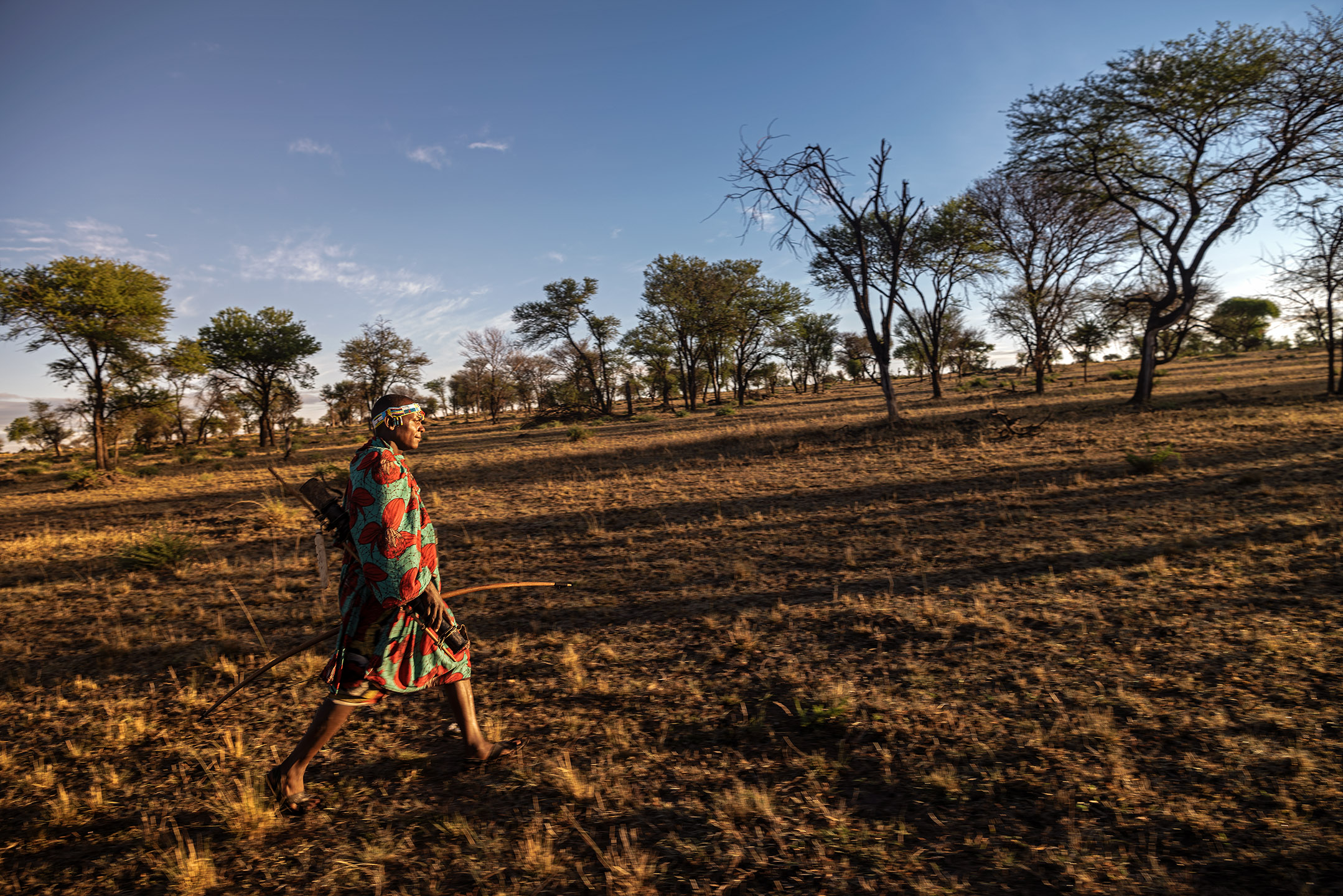 Scott: I made this photograph of Jololo, another of our Hadza guides, as we were rolling out of our fly camp on the first morning.  What I wanted to show here was a sense of movement as he scampered up the hillside and dashed toward the sun.

Wannapha: I come from a fashion background, so my first thought with this photo was that his clothing and weaponry remind me of a runway, at least one in the wilds of Africa. 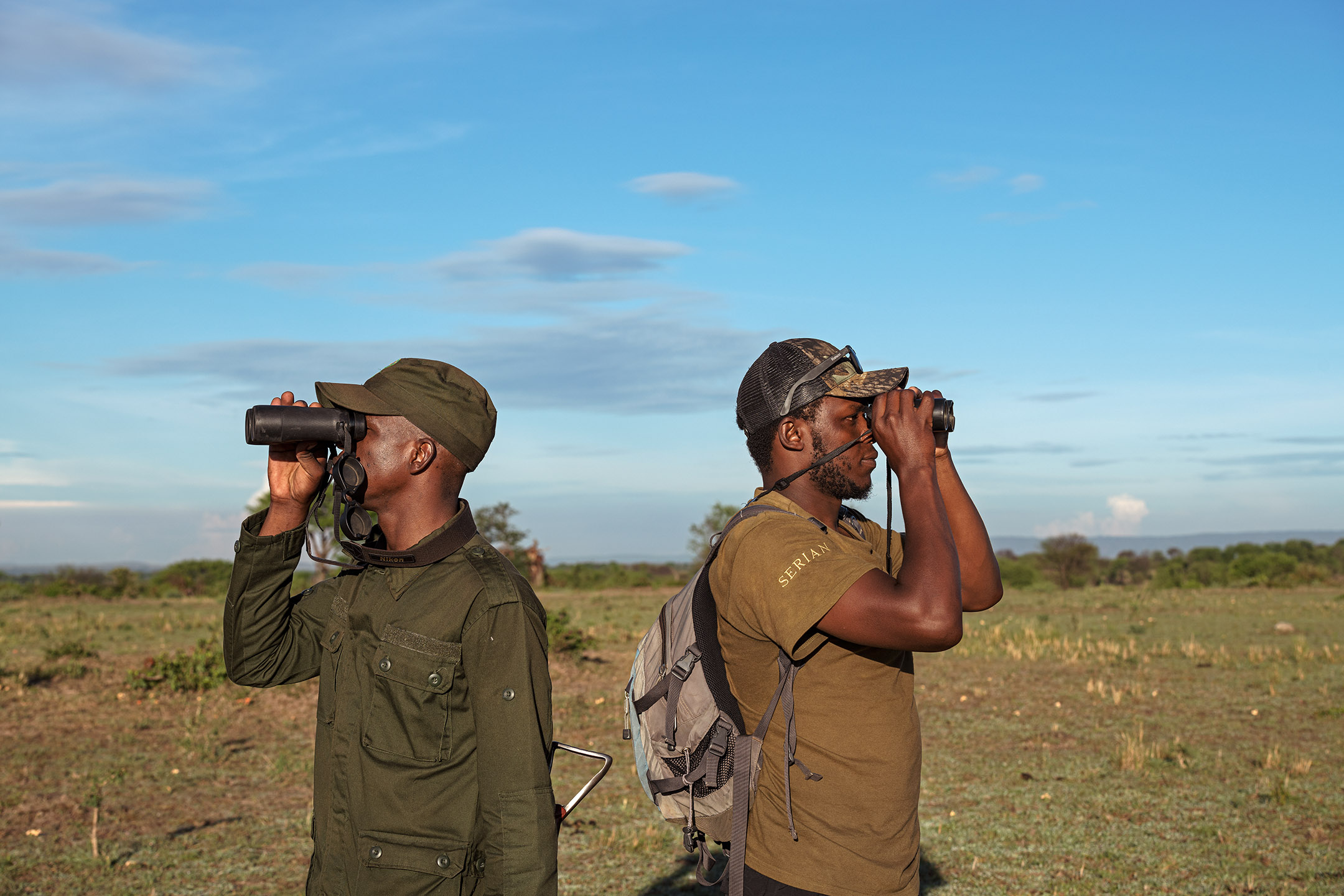 Scott: I love this photograph for its subtle comedy.

Chris: To me, this explains the rich landscape of the Serengeti.  Both Deo and Hussein search the horizon for wildlife, it just so happens in opposite directions. 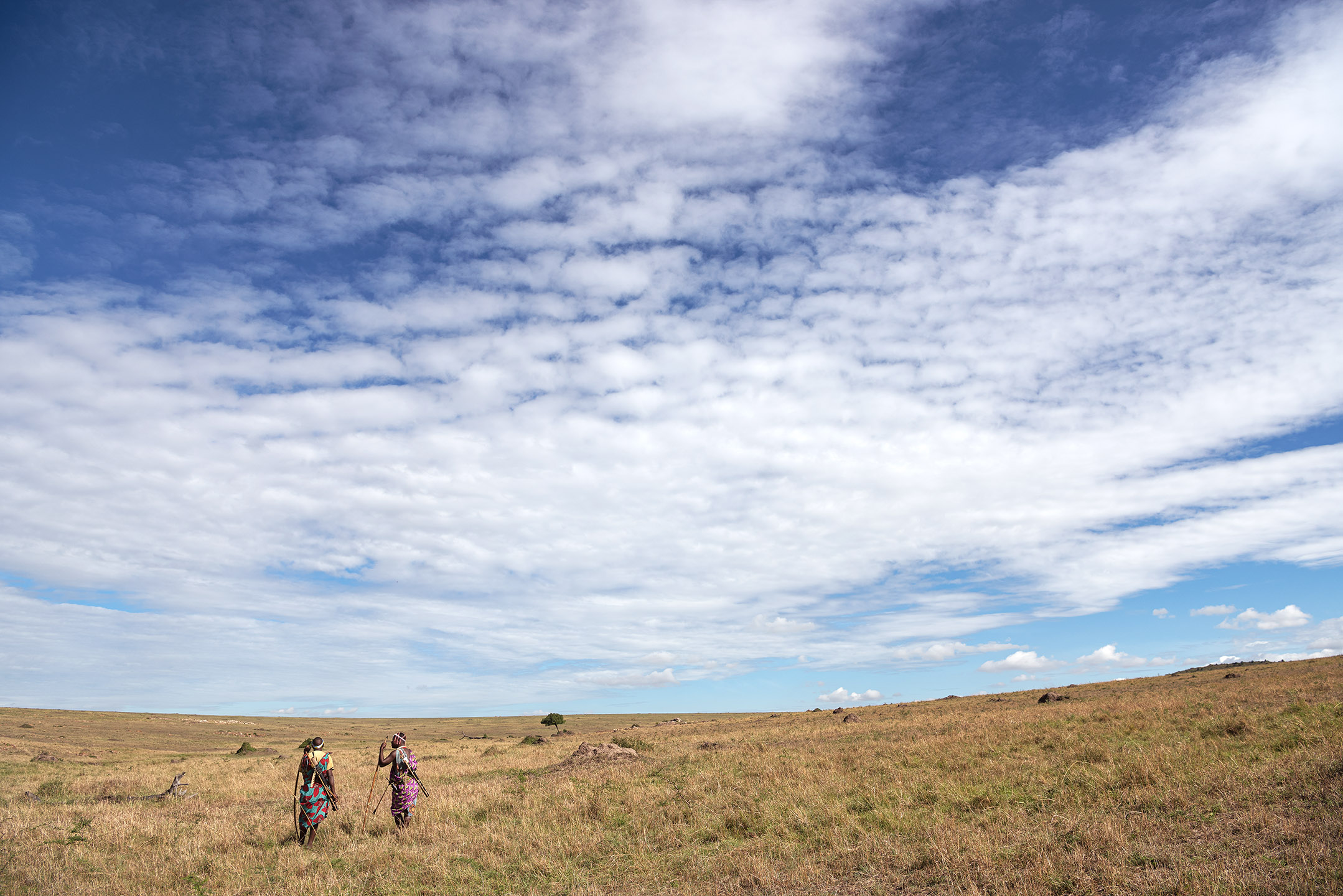 Chris: That day, I recall that we trekked for seven hours starting at sunrise.  The scale of the sky was unlike anything I’ve ever experienced…until I realized that the Serengeti plains went on for endless kilometres as well. 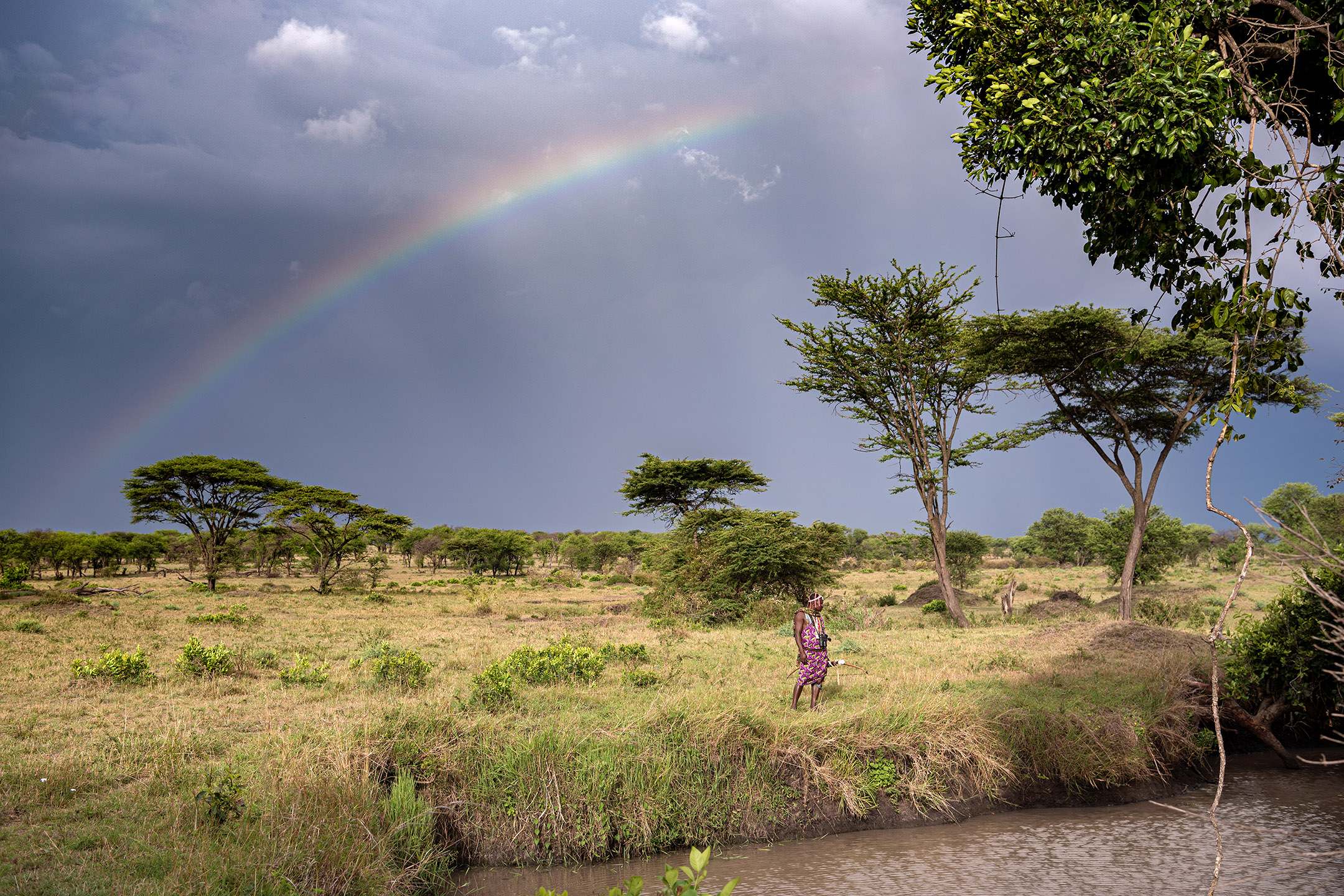 Scott: The rainbow, coupled with Tabu’s complementary outfit, make this photograph very compelling to me.  In the main feature, we published a similar image, but with an ominous raincloud rolling across the savannah, which I also love.  However, this photograph — complete with a beautiful rainbow — feels more optimistic and hopeful.

Chris: Optimistic and hopeful until we got soaked to the bone in a downpour.

Wannapha: The space here looks so huge.  Since I was a kid, I’ve had a thing for rainbows but we didn’t use this shot in the magazine because we had a similar, I think better, photo, and I was afraid this one would print too dark. 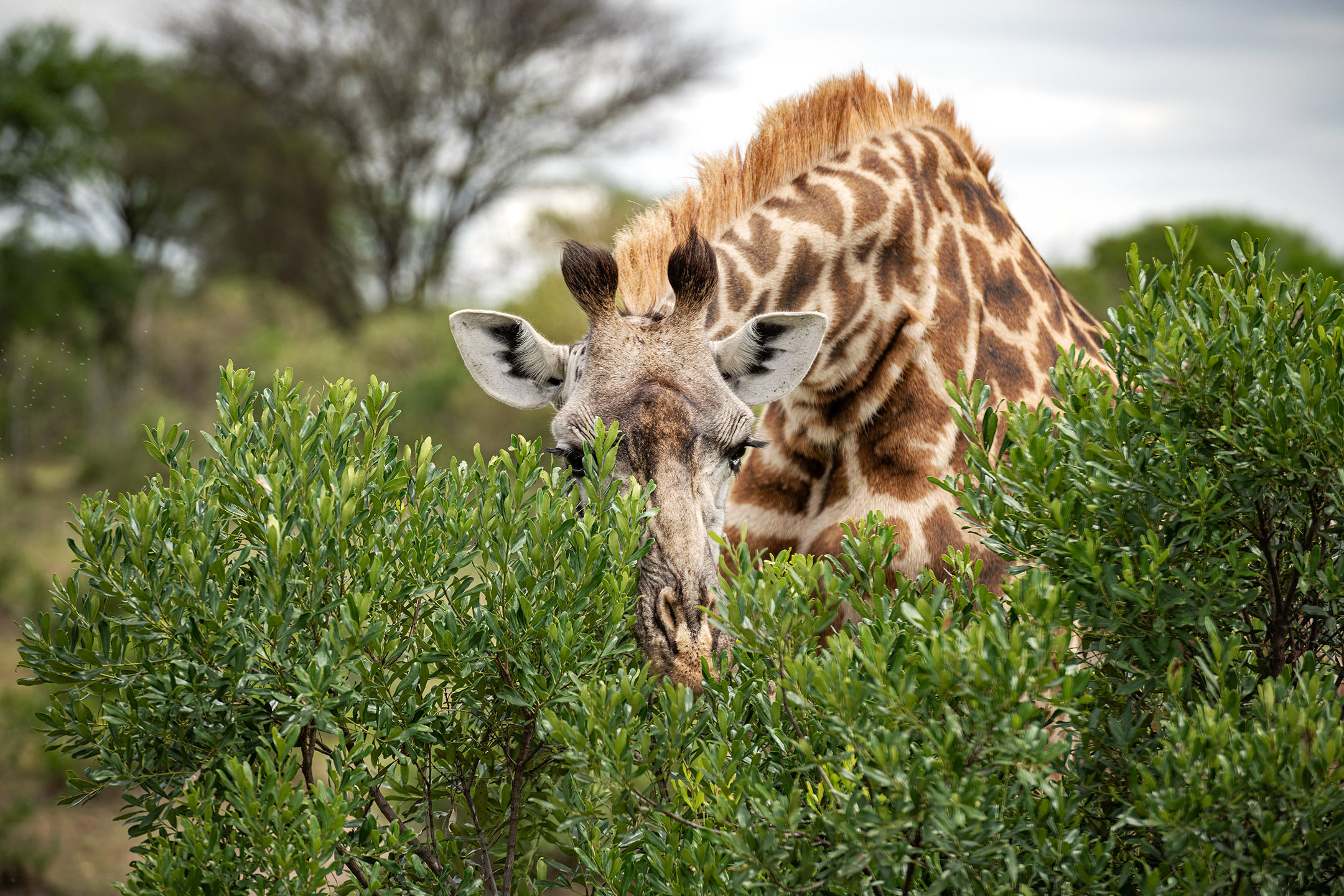 Scott: Alex calls giraffes the “supermodels of the Serengeti” and it’s easy to see why: their long necks, skinny legs and the way they teeter along as if wearing stilettos.

Wannapha: To me, it’s amazing that you can get so close to the wildlife, but what I really love are the giraffe’s eyelashes!