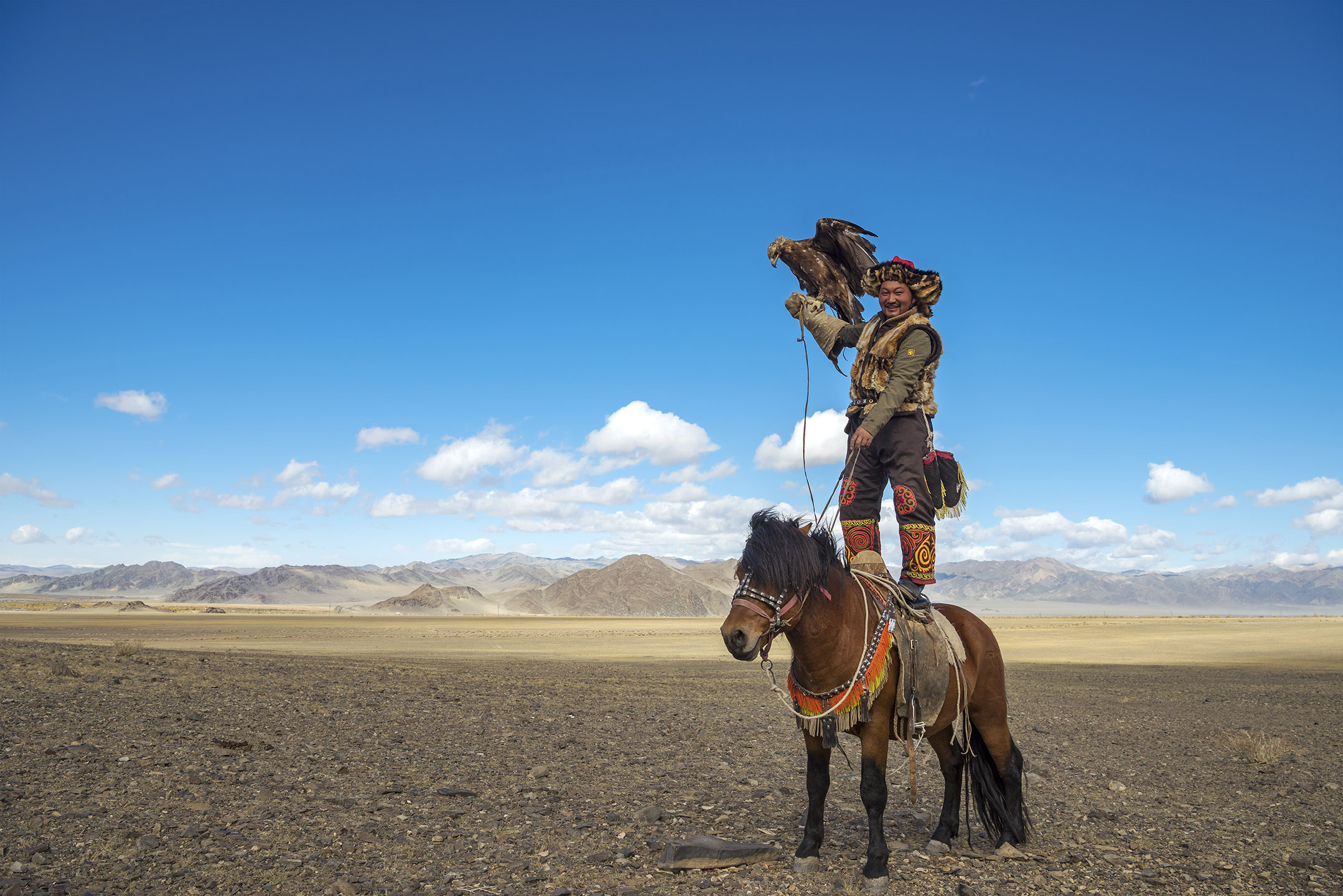 An ancient Kazakh proverb says,
“Fine horses and fierce eagles are the wings of the Kazakh.”
What an honour to witness them soar.

Cradled on the desolate edge of western Mongolia, wedged tightly between Russia and China and tucked in the shadow of the magnificent snow-capped Altai Mountain range, sits Bayan-Ölgii Aimag (Province).  Last September I journeyed here with my friends from Mongolian Outdoor Travel to document the Golden Eagle Festival, an annual gathering and celebration of the burkitshi (eagle hunters), for Singapore Airlines; my photography features on the cover and across 12 pages of the Q1 2018 issue of their PPS Club Priority Magazine, which was published this month. 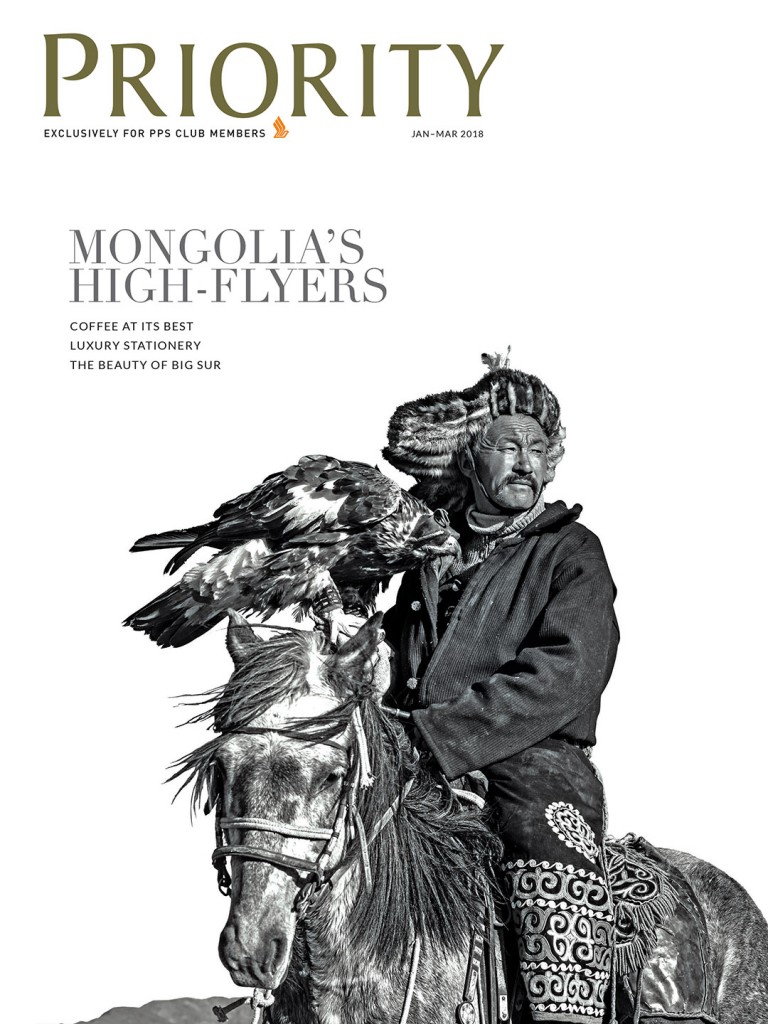 “Here comes my father,” shouted Alpamys as we rode on horseback across the craggy steppe a stone’s throw from Ölgii.  I squinted into the distance, but saw nothing.

“There, he’s right there!” he exclaimed.

I looked harder, across the vast grassland toward the soaring mountains, yet still I saw nothing.

We stopped and climbed off our horses.  Alpamys stood beside me and guided my eyes while pointing with his finger.

Finally I glimpsed a tiny figure on horseback, dust rising from pounding hooves as they sprinted across the plain.

Moments later, as the amber sun slid toward the horizon, Dalaikhan dashed up to us.  Dressed in colourful embroidered trousers and a striking brown, black and grey fur hat, he flashed a broad smile while brandishing a majestic golden eagle on his right arm.

Dalaikhan and his huge raptor had ridden 110 kilometres over the previous two days — covering at least 60 kilometres on this day alone — to join his sons, Alpamys and Bekta, and more than a hundred other burkitshi at the Golden Eagle Festival.  Each October since 2000, as the winter hunting season approaches, eagle hunters from Mongolia’s Kazakh minority congregate in this valley for the annual cultural celebration.  They are among the world’s last remaining horse-based, semi-nomadic cultures; a traditional tribal people who still roam the mountains and valleys on horseback hunting prey such as foxes, marmots and hares with trained golden eagles.

The Golden Eagle Festival is a lively carnival featuring two full days of thrilling contests designed to exhibit the eagles’ speed and accuracy while showcasing the hunters’ prowess and resolve.  It’s an extraordinary demonstration of the connection that can exist between man and bird.

Throughout the weekend celebration, the hunters also participate in a number of other traditional Kazakh games such as kukhbar, a tug of war with a goat hide played on horseback; tenge alu, a competition where the rider ride his horse at full speed while leaning over and snatching tokens from the ground; and khyz khuar, a light-hearted courting ritual on horseback typically played by the younger men and women.

The Golden Eagle Festival has grown dramatically in size over the past 18 years; the first event brought together just 20 eagle hunters and a handful of spectators, while the most recent celebration featured over 120 competitors and attracted more than 1,000 foreign visitors.

An ancient Kazakh proverb says, “Fine horses and fierce eagles are the wings of the Kazakh.”  What an honour to witness them soar.

Browse a larger collection of the reportage I made at the Golden Eagle Festival.

And see more photography and a series of short films that my team and I made in Mongolia for Nikon, from Ulaanbaatar across the Great Steppe to the edge of the Gobi Desert and back again. 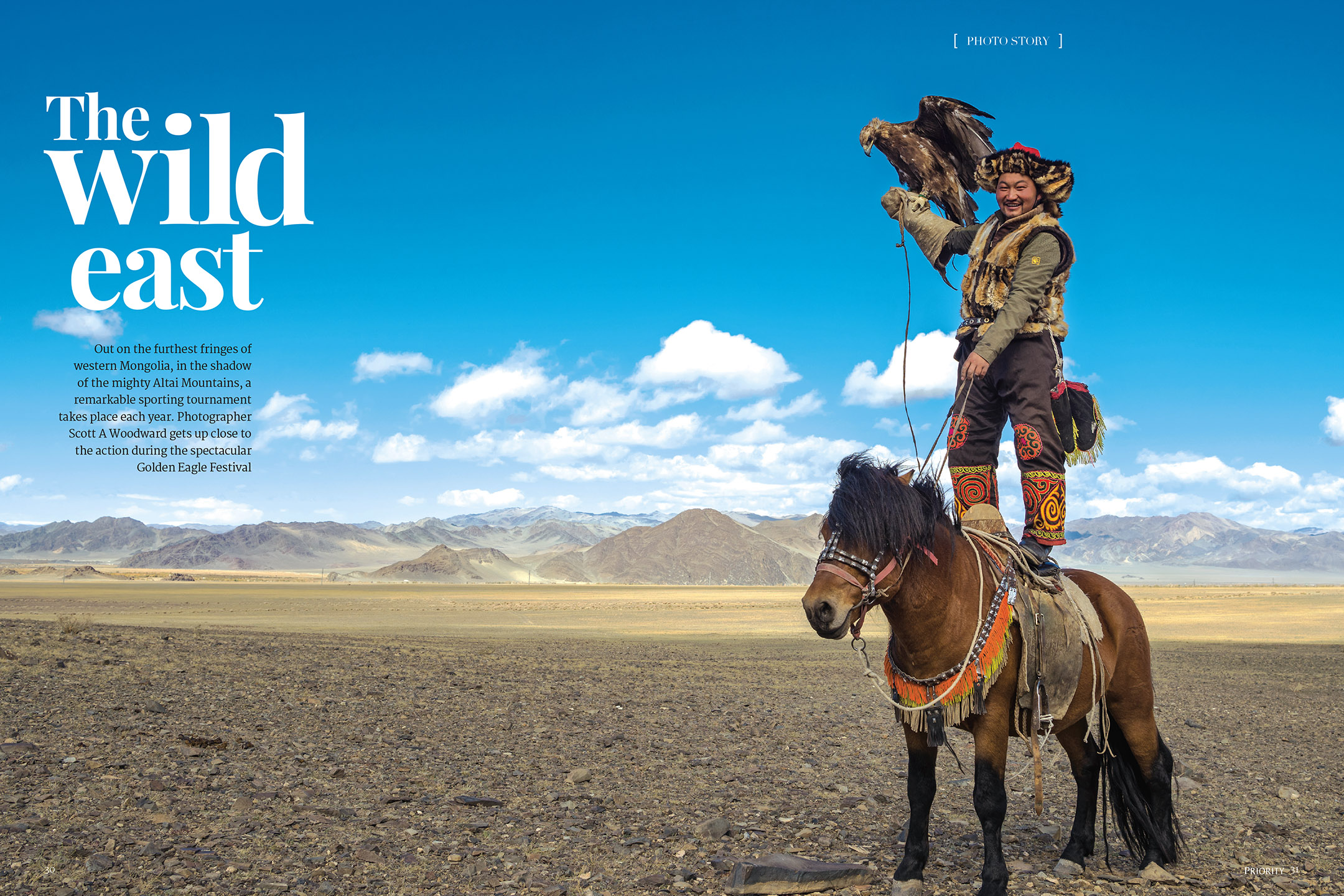 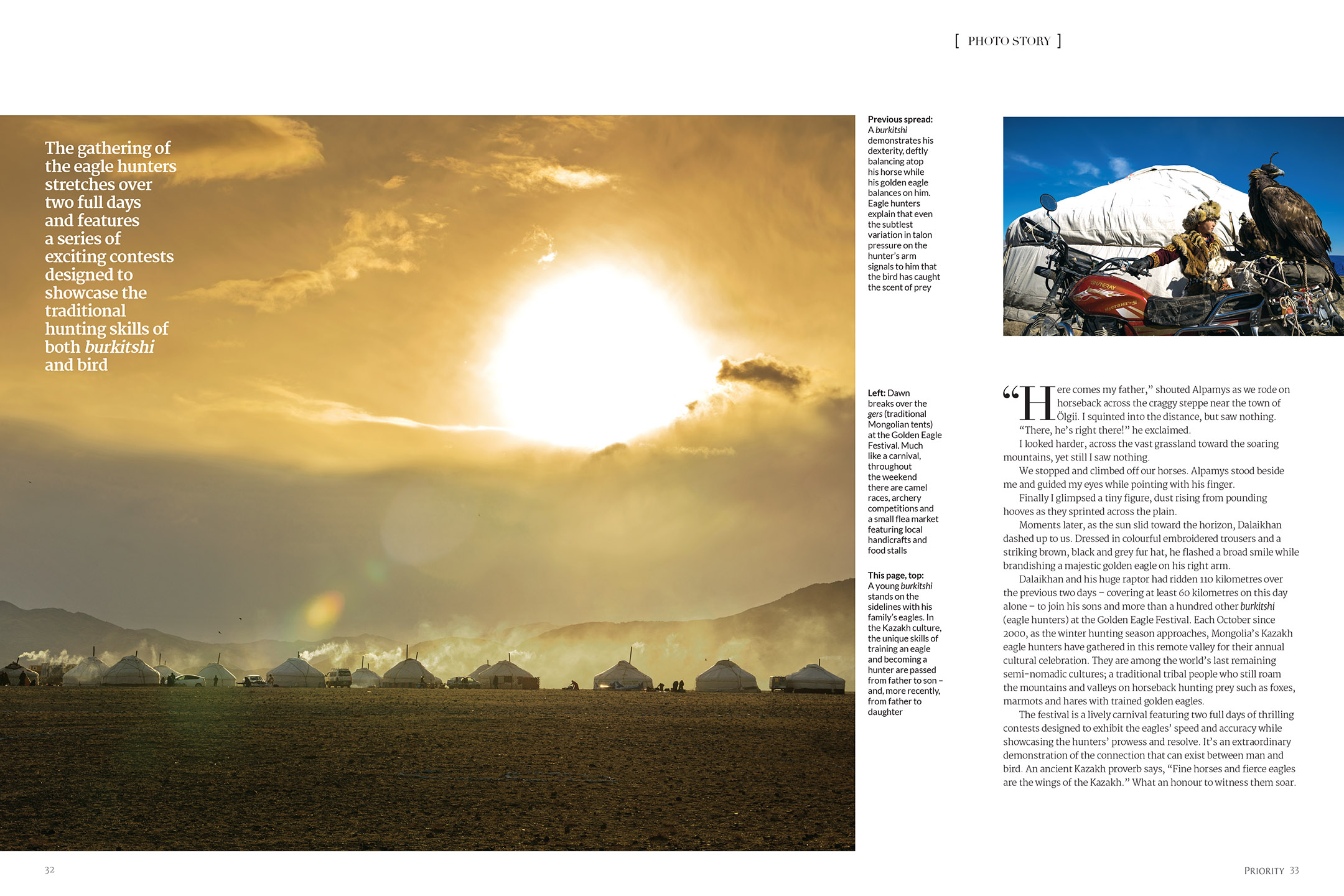 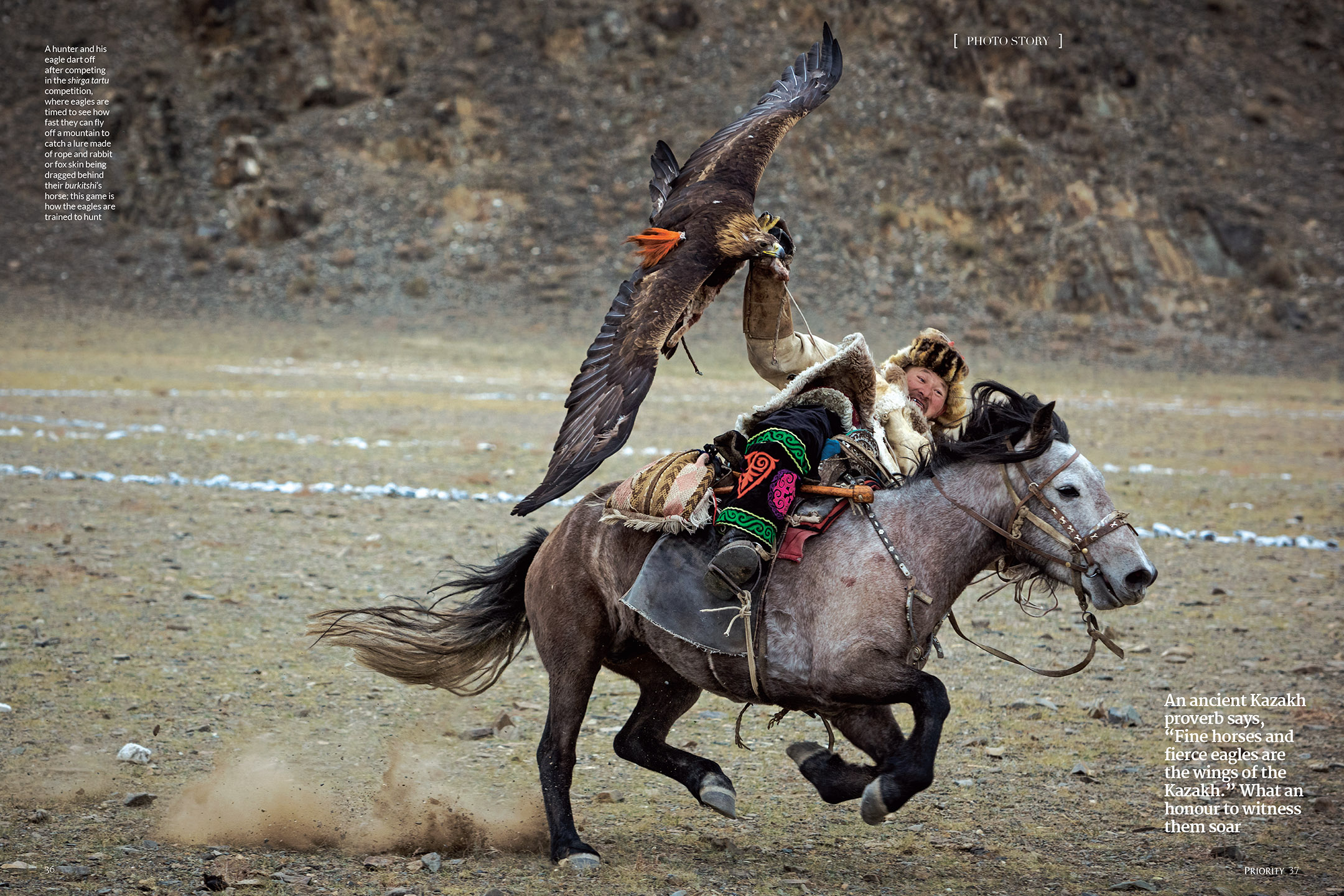 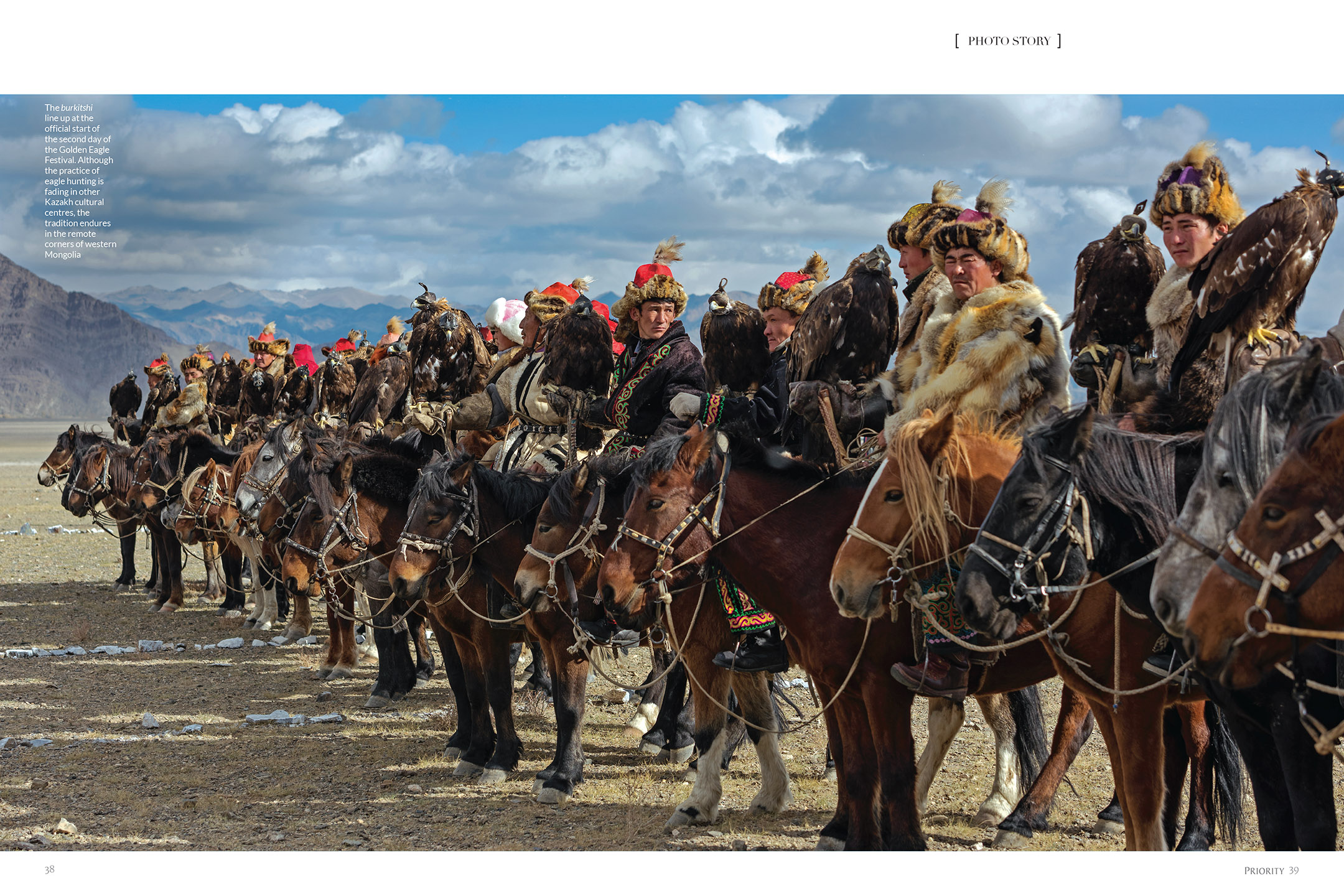 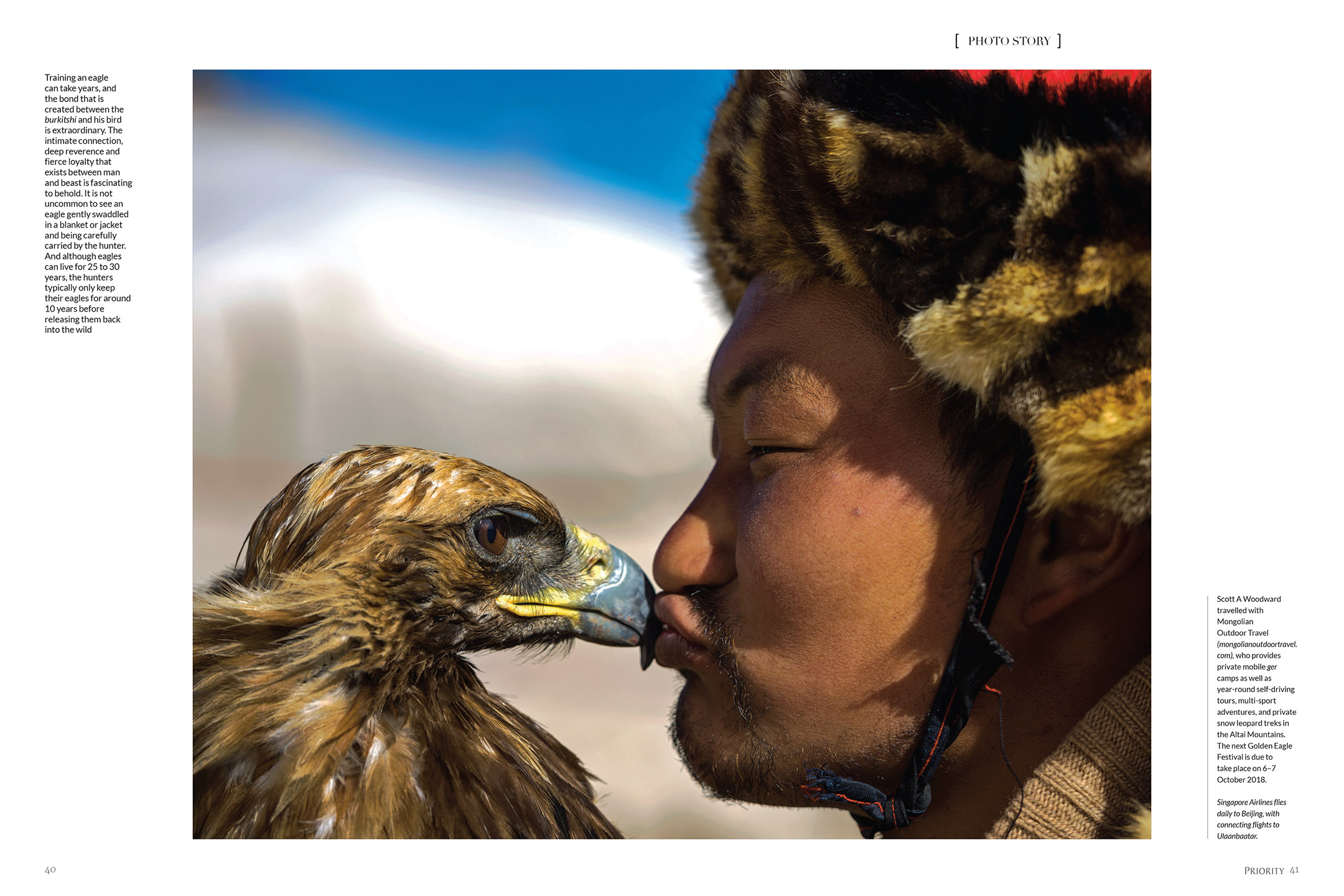 Wonderful ! I love so much Central Asia and you threw me back there again !!!

Brilliant photos, Scott! A great pleasure to meet you and let’s collaborate on something very cool together. Best Wishes!

I am extremely grateful for this, George — thank you! I would love to partner with you and your team on telling visual stories about your beautiful country

Must-listen and must-read recommendation for those interested in learning about authentic Kazakh eagle hunting culture and about the golden eagle festival scene in Western Mongolia: Dr. Lauren McGough, an eagle falconer, mentored with eagle hunters in Mongolia and wrote PhD thesis entitled “Partnerships and Understanding Between Kazakh Pastoralists and Golden Eagles of the Altai Mountains: a Multi-Species Ethnography” (found at https://research-repository.st-andrews.ac.uk/handle/10023/18955 ). See the Chapter 1 section of her PhD thesis called “The Bigger Picture” (page 62+) which gives further and enlightening information about the eagle festival scene.
In a radio interview, Dr. McGough explains how “Unfortunately in the media, what is often portrayed is Kazakhs taking eyases -baby eagles- out of the nest and that is really not the tradition” Listen to what she says from 14,26-16,46 of the Bird Calls Radio interview to understand the connection to eagle festival scene
https://birdcallsradio.com/bcr-202-lauren-mcgough falconer/?utm_campaign=meetedgar&utm_medium=social&utm_source=meetedgar.com
For further enlightenment, please read:
1. Partnership and Understanding Between Kazakh Pastoralists and Golden Eagles of the Altai Mountains : A Multi-Species Ethnography by Lauren Mueller McGough. PhD Thesis (Social Anthropology) . March 2019. Pay special attention to Chapter 1 subtitles “The Bigger Picture”
2. When the Hunt is Over: Culture and Conservation in Kazakh Eagle Falconry. Nolan R. Ebner, PhD. 2016
3. Human and Raptor Interactions in the Context of Nomadic Society: Anthropological and Ethno-Ornitholpgical Studies of Altaic Kazakh Falconry and its Cultural Sustainability in Western Mongolia. PhD Thesis. Takuya Soma, PhD. 2015
4. Altai Kazakh falconry as ‘heritage tourism’: the Golden Eagle Festivals of Western Mongolia. Battulga Sukhee, and Takuya Soma. January 2014.
All of the above should be mandatory reading before anyone writes anything on Kazakh eagle culture in Western Mongolia and in the golden eagle festival scene. Please do your homework by reading the above and listening to Dr. McGough’s interview. I am sure you will find it very enlightening and also very surprising. Things are not as they appear on the surface and that much will ve very clear after you have done this homework!