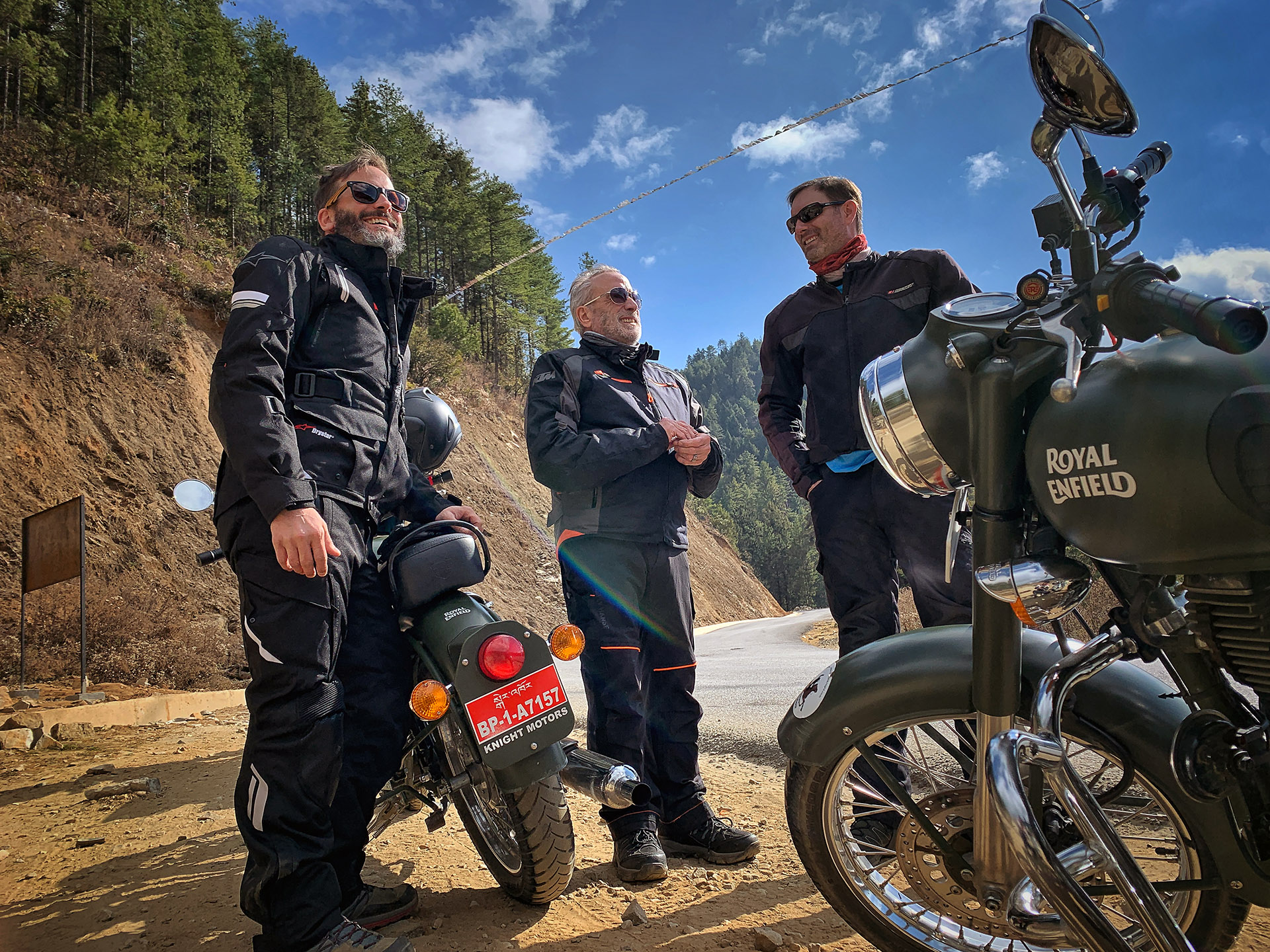 Riding motorcycles along Bhutan’s narrow
mountain switchbacks, through forests of pine and stacked
rice terraces and across its Himalayan passes was a fantasy of mine.
Sharing this experience with my father and brother was a dream come true.

There is a Buddhist proverb that declares, “It is better to travel well than to arrive.”  This seems like an apt metaphor for riding a motorcycle — that the journey is always more important than the destination.  This couldn’t be truer than on our Father & Sons ride through the beautiful Kingdom of Bhutan.  This past December my dad, brother and I took a 10-day journey across The Land of the Thunder Dragon in the saddles of Royal Enfield motorcycles.  And this month AUGUST MAN magazine featured our adventure — interviewing me and publishing some of my #shotoniphone photography I made along the winding road — in the pages of their April 2019 issue. 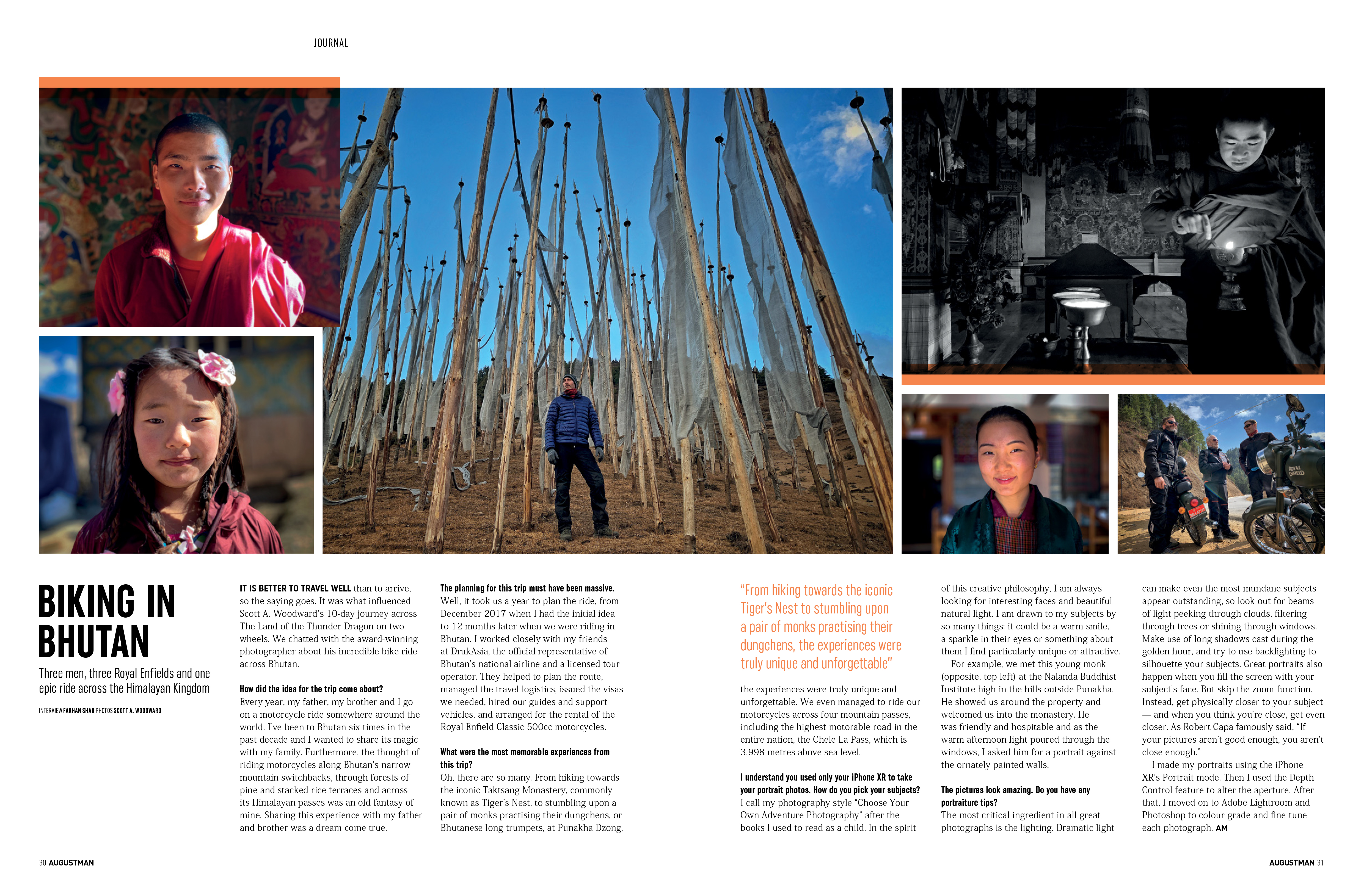 How did the idea for the trip come about?
Every year, my father, my brother and I go on a motorcycle ride somewhere around the world.  I’ve been to Bhutan six times in the past decade and I wanted to share its magic with my family.  Furthermore, the thought of riding motorcycles along Bhutan’s narrow mountain switchbacks, through forests of pine and stacked rice terraces and across its Himalayan passes was a fantasy of mine.  Sharing this experience with my father and brother was a dream come true.

The planning for this trip must have been massive.
Well, it took us a year to plan the ride, from December 2017 when I had the initial idea to 12 months later when we were riding in Bhutan.  I worked closely with my friends at DrukAsia, the official representative of Bhutan’s national airline and a licensed tour operator.  They helped to plan the route, managed the travel logistics, issued the visas we needed, hired our guides and support vehicles, and arranged for the rental of the Royal Enfield Classic 500cc motorcycles.

What were the most memorable experiences from this trip?
Oh, there are so many.  From hiking towards the iconic Taktsang Monastery, commonly known as Tiger’s Nest, to stumbling upon a pair of monks practising their dungchens, which are Bhutanese long trumpets, at Punakha Dzong, the experiences were truly unique and unforgettable.  We even managed to ride our motorcycles across four mountain passes, including the highest motorable road in the entire nation, the Chele La Pass, which is 3,998 metres above sea level.

I understand you used only your iPhone XR to take your portrait photos. How do you pick your subjects?
I call my photography style “Choose Your Own Adventure Photography” after the books I used to read as a child.  In the spirit of this creative philosophy, I am always looking for interesting faces and beautiful natural light.  I am drawn to my subjects by so many things: it could be a warm smile, a sparkle in their eyes or something about them I find particularly unique or attractive. For example, we met this young monk (opposite, top left) at the Nalanda Buddhist Institute high in the hills outside Punakha.  He showed us around the property and welcomed us into the monastery.  He was friendly and hospitable and as the warm afternoon light poured through the windows, I asked him for a portrait against the ornately painted walls.

The pictures look amazing.  Do you have any portraiture tips?
The most critical ingredient in all great photographs is the lighting.  Dramatic light can make even the most mundane subjects appear outstanding, so look out for beams of light peeking through clouds, filtering through trees or shining through windows.  Make use of long shadows cast during the golden hour, and try to use backlighting to silhouette your subjects.  Great portraits also happen when you fill the screen with your subject’s face.  But skip the zoom function.  Instead, get physically closer to your subject — and when you think you’re close, get even closer.  As Robert Capa famously said, “If your pictures aren’t good enough, you aren’t close enough.”  I made my portraits using the iPhone XR’s Portrait mode.  Then I used the Depth Control feature to alter the aperture.  After that, I moved on to Adobe Lightroom and Photoshop to colour grade and fine-tune each photograph.