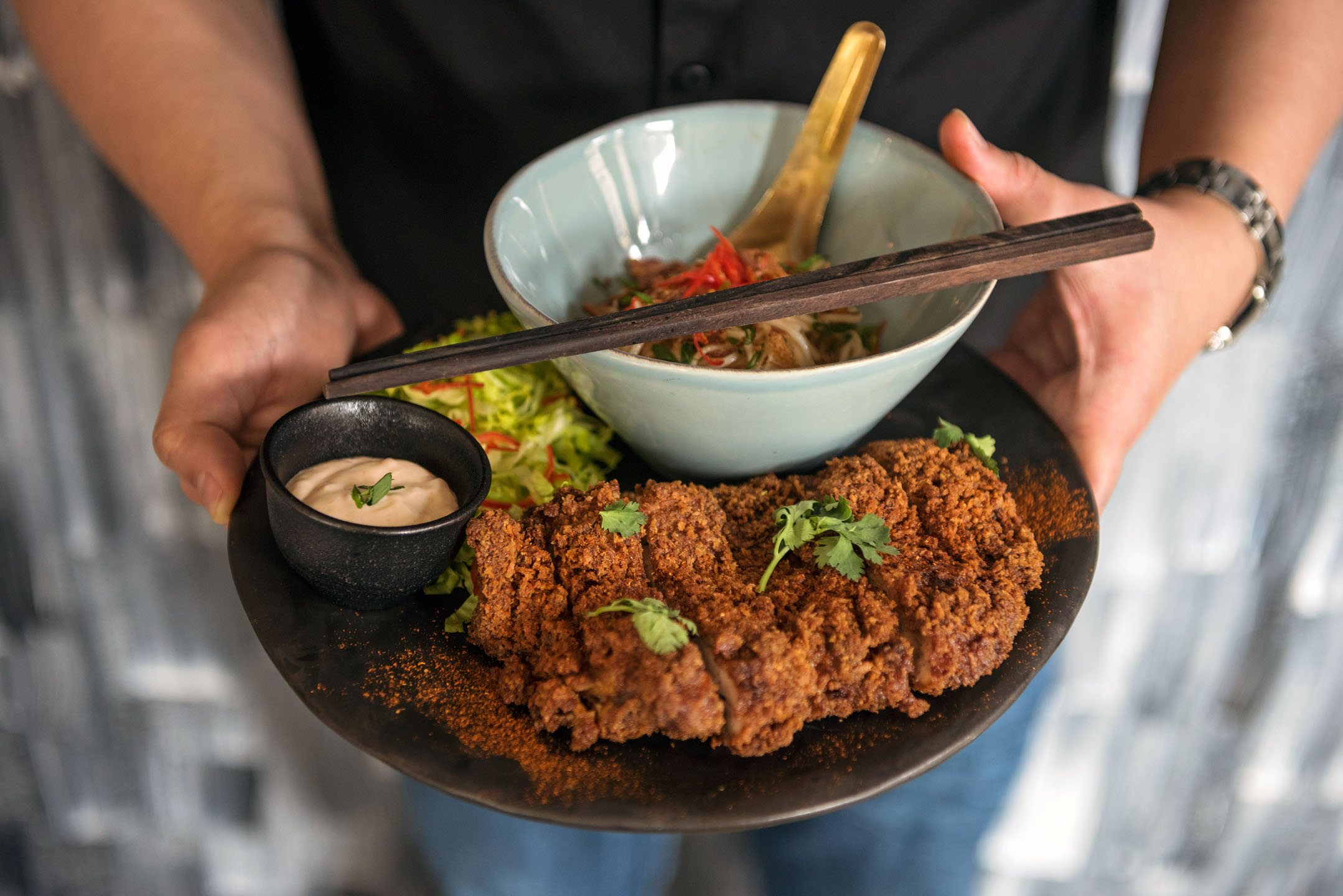 A Pinch of the Past

Take an old family recipe, add a sprinkle of innovation and you get a taste of the new generation of chefs transforming Singapore’s vibrant culinary scene.

One of the most enjoyable aspects of my job is meeting passionate, innovative and talented people all over the world.  On a recent assignment for Raffles Magazine, I didn’t need to travel far to do this; my brief was to photograph three restaurateurs right here at home in Singapore.  These men — Creatures’ KK Chong, Candlenut’s Malcolm Lee and Labyrinth’s Han Li Guang — are among a small but growing “generation of young chefs who are mining Singapore’s rich culinary traditions and re-imagining familiar favourites in a thoroughly modern yet familiar way.”  As writer Daven Wu explains in the feature ‘A Pinch of the Past’, “the effect of this marrying of new culinary techniques with local flavours and ingredients…is an outrageously skilful makeover: the dish remains completely recognizable in its taste, but is dressed up in a way that elicits smiles and nostalgic wonder at the creative imagination of the kitchen.”

Indeed, Daven notes that “nostalgia is, of course, a powerful catalyst here. KK Chong admits that a fair number of Creatures’ recipes come from his Cantonese grandmother, who became adept at Peranakan cooking for her husband. ‘But that generation never wrote down recipes,’ he says, ‘so a lot of what we do today is based on the memory of taste.’ And that, says Malcolm Lee, is where restaurants come in — to document that memory, right down to watching his mother cook, measuring every pinch of spice, every ‘cup or so’ of broth and then trying to reinterpret the result.”

“At Creatures, set in an attractive, mood-lit shophouse in one of the country’s most notorious red-light districts in Little India, KK Chong…heads up a kitchen that sends out unusual amalgams of familiar hawker and ethnic staples such as Hainanese crispy fried chicken…marinated with garam masala, that’s served with Chinese noodles tossed with soy.” While “at Candlenut, Malcolm Lee…gleefully up-ends Peranakan classics by sending out spring rolls filled with spicy prawns and candied winter melon dipped in kalamansi lime cream, and fork-tender charcoal-grilled Spanish pork that’s marinated with sweet dark soy and saw-tooth coriander, then cooked sous vide for 12 hours.” And Labyrinth’s “Han Li Guang is crafting a brand of neo-Singaporean cuisine that sucks up Eurasian, Malay, Chinese and Indian influences and repackages them into gastronomic surprises. The most popular dish on his menu is a chilli crab, a beloved staple – here reconfigured as deep-fried, soft-shelled crab that’s served with a saffron-hued oval of garlicky, spicy ice-cream. The combination of flavours is as authentic as the visual presentation is jarringly unorthodox.”

In the article Aun Koh, Chairman of Ate Group and popular Singaporean food blogger, concludes that, “cuisine, as a major part of Singaporean culture, needs to evolve. But this growth must take place in an environment that it is led by people who understand our roots, our history, the taste, the techniques and the circumstances that created the dishes that have been rooted in our unconscious.” I think it’s clear that the young chefs at Creatures, Candlenut and Labyrinth are just the men for the job.

Read the entire ‘A Pinch of the Past’ feature in the May 2016 issue of Raffles Magazine. 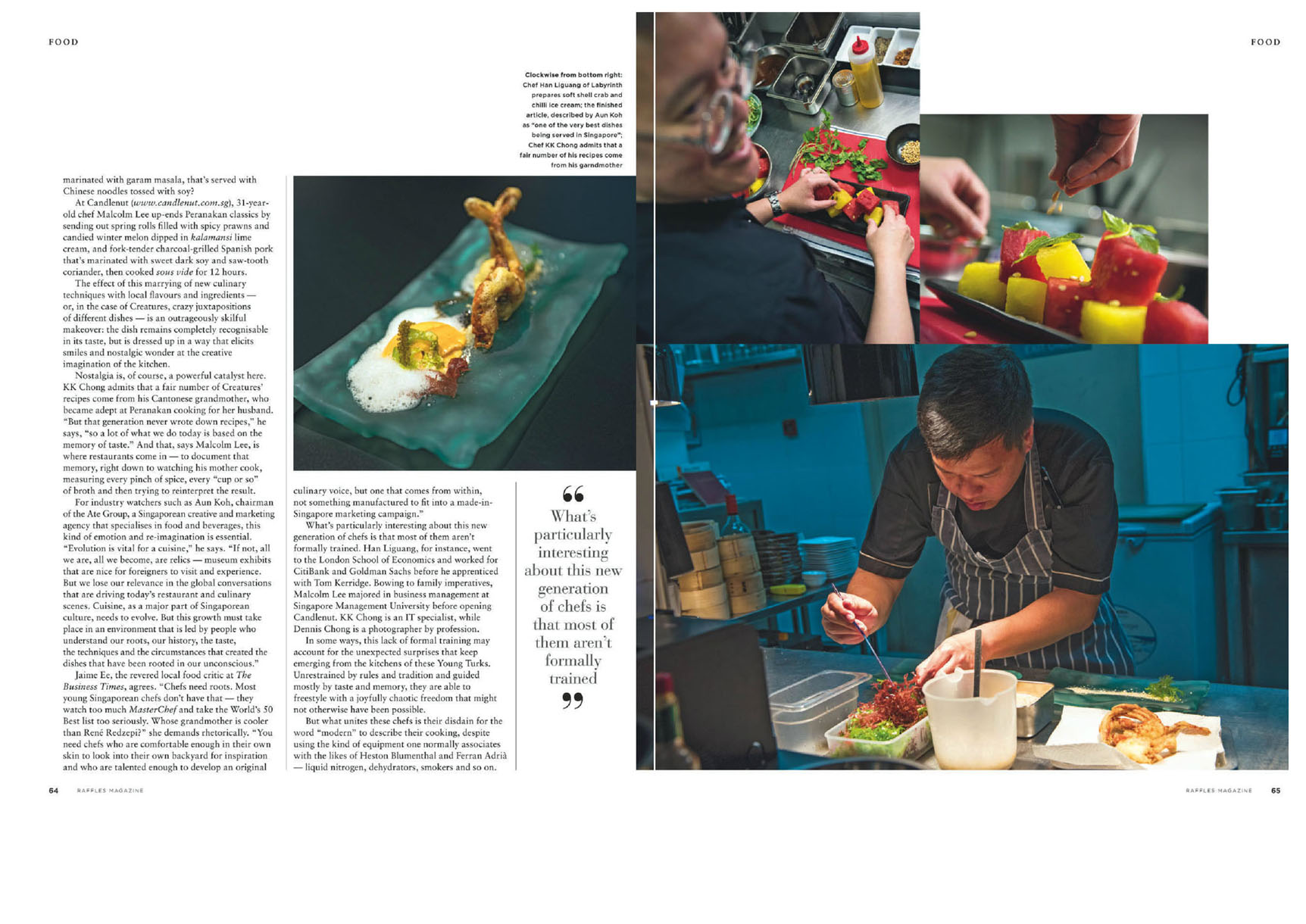